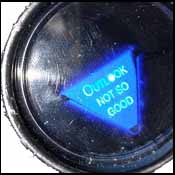 “To be or not to be, that is the question.” So goes one of the most quoted lines in Shakespeare, probably in all of literature. It’s so well known that it’s become a cliché; people who know almost nothing of Shakespeare know that phrase. Most of the times when I’ve seen it acted, the actor playing the character who speaks it, Hamlet, makes it an intellectual question, maybe something for philosophy.

Except that it isn’t.

In context of the play, Prince Hamlet is contemplating suicide and every moment of that speech should be about whether or not Hamlet will choose to end his life – right then and there. If I was staging it, I’d have Hamlet with a sharp knife, playing with his wrist, maybe cutting himself, while he debates his choice.

It is the choices made and not made that drive the play – or should. And they drive story in general as well. How will a character act in a given situation? Even to choose not to act, not to make a decision, is in itself a choice.

In one of my favorite films, Casablanca, the female lead (Ingrid Bergman at her loveliest) confronts ex-lover Rick (Humphrey Bogart at his manliest) over letters-of-transit that will enable her and her heroic husband, Victor (Paul Heinreid at his Paul Heinreidiest), escape from Nazi-controlled Casablanca. Rick has refused so far to surrender the letters-of-transit because of lingering resentment at having been ditched by Ilsa. Problem is, she still loves Rick so she won’t shoot him to get the documents. She falls into his arms and tells him that she can’t choose, that he will have to choose for her, for all of them.

Rick holds her and then simply says, “All right. I will.” From that point, the movie rockets towards its fabled conclusion. Rick has been essentially choosing not to act up until this point. He now makes choices that will resolve all their fates.

Think of your own life. What is more important? What a person says or what a person does? It’s what they do and that reflects choice and that reveals character. What a person says is also a choice and an act – they defend, they deny, they explain, they confront, they rationalize and so on. We all like to think we would know how we would react in a crisis situation but the truth is we don’t. We only know how we think we would act. You don’t know until you’re actually in the moment. That’s when you learn who you really are. That’s when we learn who a character really is. That’s the story.

This is a big year for story. The national political scene is one huge story. Choices are made constantly. Who do you choose to trust, who do you choose to believe, who will you choose to elect? Each choice is an act and each act tells us something about the character/person making that choice – in this case, ourselves and our country.

Each choice has consequences for the character or the person – good, bad, or indifferent. They link together, these choices made or not made, and they determine how the story comes out, what the destiny is. It’s true in fiction because it’s true in real life.

Choice defines our humanity and our freedom. Where there is no choice, there is no freedom. It doesn’t make it easy but it sure makes for a better story – whether we read it or live it.