Star Trek: The Next Generation – The Next Level

Star Trek: The Next Generation had to do a lot to convince fans of Gene Roddenberry’s trendsetting original series that it was the same vision, merely updated. By then, there had been two decades of just Kirk, Spock, McCoy and the crew of the U.S.S. Enterprise. The fans felt a certain ownership having saved it from cancellation during the original network run and then created an unprecedented following that led to an animated series and four feature films. The notion of continuing the series and setting it 78 years in the future left people wary.

The turmoil surrounding the birth of Star Trek: The Next Generation and the haphazard production of the first season had fans even more concerned before the new show debuted in late September 1987. In those early Internet days, word still spread at warp speed as familiar names David Gerrold and D.C. Fontana joined and left staff while other producers and writers seemed to be named with startling regularity.

The show survived a very shaky first year and matured into another trendsetting series that paved the way for tons of syndicated fare and showed that the Star Trek brand could be extended. And now, the second series has to prove itself all over again. The special effects for the seven seasons were produced using video production techniques, making it difficult to upgrade to Blu-ray. But not impossible.

Last September, CBS Home Entertainment announced they had solved the technical dilemma in a cost effective away, allowing them to remaster the entire series for Blu-ray release, with season one due later in 2012.  Recently, we posted a video to show how the work was done, comparing scenes from the original video to the Blu-ray and it looked pretty amazing. The question then became, could this be sustained for entire episodes.

To allay those fears, they are releasing on Tuesday, Star Trek: The Next Generation – The Next Level, a sampler Blu-ray, containing “Encounter at Farpoint”, “Sins of the Father”, and “The Inner Light”, selecting three popular episodes from across the seven seasons.

Having watched these, it’s good to know the project has received the required TLC. The images look sharp and amazing, with new details revealed in the effects. Everything is sharper and richer, from the uniform colors to the effects. To achieve this, Paramount’s technical staff has gone back to the original film negatives before the shows were edited on video tape and reedited the episodes to match their broadcast versions. As a result, the film effects were able to be recompositioned with high-definition and 7.1 DTS Master Audio. Thankfully, Michael and Denise Okuda were hired on as technical consults ensuring the fans the right people were overseeing the endeavor. 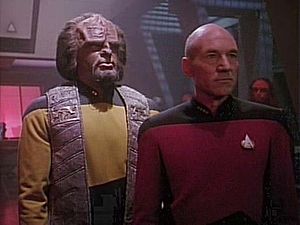 It’s interesting to watch the pilot and selected episodes from the transitional third and strong fifth seasons. The first thing you notice is how bare the original Bridge set appeared and how still all the actors appear, with the exception of Jonathan Frakes’ Riker.  From the pilot forward, the one who may have loosened up the most was Gates McFadden if you compare her from “Encounter” to “Sins”. Stewart’s character was softened by the writers and he adapted accordingly, strengthening his work which is nicely on display in all three episodes. (And it’s nice to be reminded of just how menacing Q was in the pilot before he was played with menacing tongue in cheek in later appearances.)

While Fontana wrote a pilot with the necessary exposition, it still felt awkward as the Q and Farpoint storylines never really gelled. Characters weren’t properly introduced or the ship’s mission fully explored so it felt sort of like Star Trek but not quite.

Looking at “Sins”, though, this was a pivotal episode as it deepened the character of Worf and cast a spotlight on Klingon society and how all the talk of honor was more often than not just talk. Worf stood as an example of what it truly meant to embody the notions of honor and family. This was when the show was finally gaining its stride and it shows. This was also the season the spandex uniforms were traded in for more realistic wool gabardine and the regular cast looks far more natural. By now, the sets were better decorated and lit, enriching the shipboard experience.

The final episode was a showcase for Patrick Stewart but also showed how the writing had grown with confidence, letting them take chances such as this exploration of an alien culture doomed to extinction, reaching out to Picard to be remembered. It’s a terrific blend of acting and writing that made for not just good science fiction but great television.

These three samplings demonstrate that the series will be worth rewatching as it celebrates its 25th anniversary this year with the Blu-ray editions.