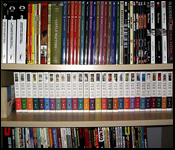 It seems when I write pieces here on ComicMix that are good-natured and optimistic, no one cares. When I get hot and bothered (and make sweeping declarations that demand debate), you get excited. So, you want riled up? You got it!

I think the comic book industry as a whole would be better off if it went digital for all monthly titles, and only printed graphic novels.

Settle down, settle down. You’ll have a chance to put me in my place in the comment section. Or you can skip my argument completely, and just go down to the bottom of the page, and start the flame war. Either way, my ego gets fed.

Let’s face it. Making a comic book every month isn’t easy. If it was, Justice League wouldn’t be two weeks late. But wasn’t there a big hard-and-fast rule in place stating no book would be delivered late, lest the creative team be removed for one that could keep up? Well I guess that only applies to talent who don’t exclusively work for the parent company, and have “Chief” on their business cards. But I digress.

Most comic books these days are “written for the trade.” Almost every cape on the racks today get four to six issues of a singular plot-line that crescendos into a final epic conclusion. Then, if we’re lucky, a one-shot to settle things down to the status quo. And the cycle repeats. In the case of other books (Matt Fraction’s Invincible Iron Man comes to mind) these arcs could last up to a year or even longer. This means that every month you get a bite of the candy bar. Wouldn’t it be nice to just eat the whole damned thing all at once? In an medium where the end product is sum of many parts, having all those parts only stands to make the whole piece better.

Brian Michael Bendis may physically have a disease preventing him from writing a book that isn’t deconstructed. And frankly, who disagrees that he works best in the bigger picture? I won’t ever buy singular issues of Ultimate Spider-Man. It’s too good in trade. The same goes for many other books I happen to get (or borrow with frequency); Invincible, The Sandman, Astro City, Y: The Last Man, Ex Machina, Fables… need I go on? In all of those cases, and so many more, collecting a book into a longer format makes for a more enjoyable experience. And when a trade it released, there is no waiting for that next chapter. I know there’s a massive caveat to that one folks, but I think the point is clear enough.

But Marc, you plea… If the industry went straight-to-trade, comic book shops would simply close up and die. Because right now, most comic book stores I know are so swamped with business they don’t even carry trades. Or action figures. Or magic cards. Or D+D. Or host local bands. Or have organized book clubs. The fact is, store owners lose more money stocking their shelves with every monthly book that comes out, and subsequently not sell them, then do they on carrying trades. One store in particular, Challengers Comics + Conversations in Chicago, told Unshaven Comics that they would only carry our book when it became a trade.

When I was told this by the very cool owner, my eyebrow raised. “We do far more business in trades than we do in monthlies man, sorry.” They even have a “Library” subscription where so many dollars a month guarantees you access to shelves of trades to “check out.” If I were a commuter and lived anywhere near the store, I’d be on that like Michael Davis on an Asian GoGo Dancer. My point being that brick and mortar stores could augment their current offerings and not lose their leases.

Monthly books allow fans to “sample” a title before committing to it. And those who follow along with my reviews (over on Michael Davis World, plug plug plug) know that recently I’ve committed to a “two bad issues in a row means I drop the title” policy. Thus far, that means I’ve dropped JLI, Red Lanterns, Green Lanterns: New Guardians, The Fury of Firestorm, and Irredeemable. If my dream came true, wouldn’t that mean I would stand to lose more money buying a multi-issue trade for a series I’d be unhappy with? I’m willing to eat crow on that one. To a point. You see, in the cases of all those books I listed, they all suffered from the same problems.

Predictable plots hampered by a repetitious narrative structure, or incoherent direction on the whole. As an example, Fury of Firestorm(s?) issue to issue took the same plot point (Danger! Transformation! Hitting!) and regurgitated it three times in a row. Through the fatigue, it becomes clear; the entire first arc takes place over one or two nights. Read as a whole though, the pacing wouldn’t be as troublesome to me. And in the case of JLI, where the plot was as by-the-books as you could get… I would contest that taken in 1 large chunk, it’s far easier to enjoy the staple “assemble the team and fight the giant evil” plotline when it’s not broken up into six parts. Especially when it fights for my attention with better-written monthlies like Batman, Action Comics, or Fantastic Four.

It’s a big argument, one that I hypocritically don’t even support on the other side of the aisle. Unshaven Comics made the decision to release issues in lieu of trades. But that, as Alton Brown would say, is for another show. I’d like to think I’ve given you enough to mull over. So, go ahead my bubbalas. Talk amongst yourselves. I’m getting a little verklempt. Trades vs. Monthlies… Discuss!