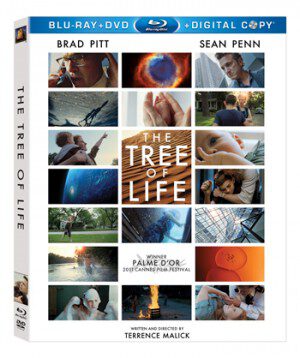 The story goes that in Stamford CT, so many people walked out of Tree of Life and demanded their money back that the management had to post a sign explaining the movie was not your traditional story and that no more refunds would be issued. On the one hand, it says people pick movies indiscriminately and it also says without being prepared, more thoughtful works can be poorly received.

Director Terrence Malick is an artist with film, turning the moving picture into portraiture. Since his first film, Badlands, the cinematography alone is a reason to seek out his films. There’s usually a long wait between his movies because he takes his time conceiving, making and editing each one, building up anticipation from his fans and the actors who love to work with him. Few get to do it twice although the current movie does feature Sean Penn for a second effort. Recently, though, he has bad mouthed the film, wondering what he was doing in it and yes, Tree of Life can be a real headscratching experience.

But, Malick gets credit for tackling the big issues of life, the universe, and everything. He focuses on a single nuclear family, seemingly set in the 1950s, but all the themes are large ones. So large, in fact, that when there’s a fissure, everything cracks apart. And when that occurs, Malick takes us back to the beginning, and I mean the beginning. We’re talking the Big Bang, a cooling planet and the beginning of life. The lush origins of our world through the early days of the dinosaur is a wonder to watch and it transfers brilliantly to the home screen in the Blu-ray edition coming this Tuesday from 20th Century Home Entertainment.

Brad Pitt and Jessica Chastain are a happily married couple, raising three boys in an idyllic American suburb. Most of the film follows their development through those pivotal childhood years and like a work of literature, says more through what is not spoken than is conveyed in dialogue.By setting this in the past, it automatically evokes a sense of longing in the audience. Curiously, this is a past without much in the way of technology: no radio or television, just a phonograph. 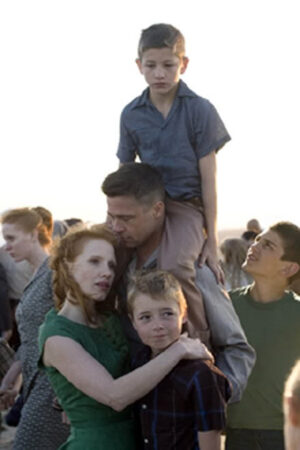 This film requires you to pay attention and think so in time you come to realize that Pitt is an engineer with a raft of patents for inventions that he hopes to sell. When he cannot control the external forces of the world, he more tightly controls his family, blind to the toll it takes on his eldest son and even on his wife.

There’s a long stretch when Mr. O’Brien is gone traveling, hoping to sell his inventions, leaving wife and children to their own devices. Without his father’s firm hand and quick tongue forcing him to conform, Jack acts out, free for the first time in his life. That leads to acts of cruelty and careless behavior, actions Mrs. O’Brien largely ignores, enjoying her own taste of freedom.

At one point and again at the end, we jump in time to the adult Jack, played by Penn, who is an unhappy man following in his father’s engineering footsteps. He’s haunted by the memory of his middle brother, the gentlest of soles, who died (without explanation) when he was 19, which seemed to fracture the family. Jack, like Malick, is trying to understand the world and man’s place in the universe.

There’s a lot of interesting themes here but it requires watching multiple times to fully grasp. The entire final sequence is as much of a mind-blowing bit of business as was Stanley Kubrick’s Star Child ending to 2001. As a result, the parts are all interesting, but you’re left uncertain of what it was all about. It’s certainly open to interpretation and discussion, therefore successful on one level, but it ultimately fails to work as a big budget piece of entertainment, hence people leaving the theater in frustration.

Malick gets understated performances from his cast and they all feel like neighbors we once knew from our own childhood.

The Blu-ray disc comes with a series of extras that were not included on the advance screener from 20th and therefore cannot receive comment. There will be a Making Of documentary but Malick himself will not appear to explain his work, letting his cast and fellow filmmakers do the talking for him.