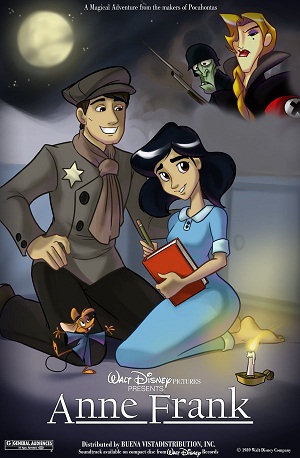 Disney’s Anne Frank is an animated film released by Disney in the spring of 1989. It is very, very loosely based on The Diary of Anne Frank, but takes a lot of liberties with the source material, adding a talking animal sidekick, a Nazi necromancer Femme Fatale, and a Happily Ever After ending.

Despite Disney’s assurances that they understood the sensitivity of the source material, it was critically panned for its handling of the Holocaust, particularly the ending, where Anne liberates Auschwitz. It was a Box Office Bomb and was largely buried by Disney. Since Vindicated by Video.

C’mon– you know Disney would do a live action version if they could cast Lea Michele in the lead.

via Disney’s Anne Frank – Television Tropes & Idioms. (WARNING: TV Tropes Link. Do Not Click If You Have Anything Else To Do For The Next Two Hours.)