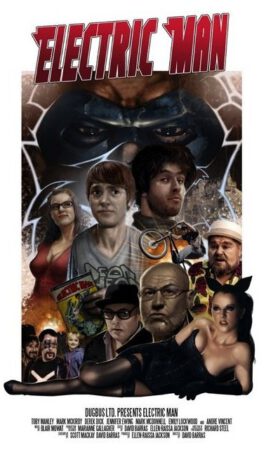 Electric Man, the micro-budget comedy shot in Edinburgh, has been selected for the prestigious San Diego Comic Con International Film Festival on July 13th – and is the only UK feature film to play at the world famous comic convention this year.

The film tells the story of Jazz and Wolf, two cash-strapped comic shop owners who need £5,000 in a hurry if they are to save their comic shop in Edinburgh. As luck would have it they chance across a copy of Electric Man issue 1 which just happens to be worth £100,000. But there are other people after the comic and it is soon lost, stolen, switched and switched again as Jazz and Wolf try to save both their business and their love lives.

Shot on a micro budget, the film has already gained BAFTA New Talent Awards nominations for its script and score as well as being shortlisted for Best Feature at the Celtic Media Festival. Selection for San Diego Comic Con places the film with the industry big hitters. The movie was selected as only one of three feature films to play this year’s festival from over 200 initial entries.

Director David Barras explains: “This is a game changer for us. We had already planned for digital distribution later in the year but we were going to limit that to the UK. Comic Con is enormous and we’re now looking to give the film a global launchpad. As a small independent movie we have to pick and choose where we go. But San Diego was the holy grail for us. Yes, it has blown a massive hole in the budget but we would be mad not to go. Who wouldn’t want to be at the same convention as Iron Man 3 and the new Superman movie?”

Cinema goers in London had the opportunity to see for themselves what all the fuss is about on Sunday 8th July, when the film played at The Prince Charles Cinema in Leicester Place. The film has already played to a sold out audience at the cinema in May but the team are bring it back to coincide with the London Film and Comic Con and give the capital’s movie goers a sneak peak before they fly to California for the film’s big night at Comic Con.

Electric Man is already a UK success story but the movie is far from your typical British fare. In an industry that is used to producing Scottish films that are usually about shooting up or shooting grouse, Electric Man is a distinct change of pace. Billed as ‘The Maltese Falcon meets Clerks’ the film makers have produced something set in the UK but with a definite American flavour.