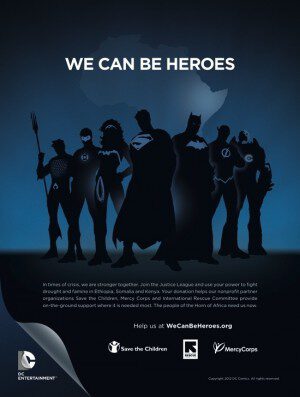 (January 23, 2012 – New York, NY)  DC Entertainment, home of the world’s greatest super heroes, today unveiled an unprecedented giving campaign to fight the hunger crisis in the Horn of Africa.  This multi-million-dollar commitment over the next two years will be supported across all Warner Bros. Entertainment’s and Time Warner’s businesses and feature DC Entertainment’s iconic Justice League characters, including Superman, Batman, Wonder Woman, Green Lantern, The Flash, Aquaman and Cyborg, issuing the call to action, “We Can Be Heroes.”  The announcements were made at a press conference today in New York by Barry Meyer, Chairman & CEO, Warner Bros.; Jeff Robinov, President, Warner Bros. Pictures Group; and Diane Nelson, President, DC Entertainment.

We Can Be Heroes will support the efforts of three humanitarian aid organizations working in Africa—Save the Children, International Rescue Committee and Mercy Corps—as part of the global effort to fight the current hunger crisis in the Horn of Africa.  The region is suffering its worst drought and famine in over 60 years, with 13 million in need of critical assistance and 250,000 facing starvation in Somalia alone.  Each partner organization was chosen for its track record of effective and expeditious humanitarian aid efforts in Africa. 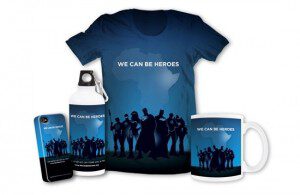 We Can Be Heroes will be supported via promotional exposure across all of Time Warner’s divisional advertising platforms (Warner Bros., Turner Broadcasting, Time Inc., HBO), generating millions of consumer impressions and creating crucially needed awareness of this crisis worldwide.  Save the Children, International Rescue Committee and Mercy Corps will equally share a corporate donation of at least $2 million over the next two years comprised of cash donations, employee matching funds and consumer matching funds.
“Warner Bros. has a long history of corporate philanthropy and outreach, and this campaign proudly continues that tradition,” said Meyer.  “We are a global company, and this is a global issue.  By marshalling our expertise in consumer and fan engagement and creating global awareness, we hope we’re able to inspire others to join us in becoming ‘heroes’ and make a difference in the Horn of Africa.”
The Justice League characters were chosen by DC Entertainment both for their global recognition as well as their demonstration of strength in unity and numbers.  The campaign’s graphic identifier features the iconic Justice League characters—Superman, Batman, Wonder Woman, Green Lantern, The Flash, Aquaman and Cyborg—outlined in silhouette against the African continent.  Each of these characters is a super hero in his or her own right, but when they band together as the Justice League, they become an unstoppable force for good and right in the universe—a key message of the We Can Be Heroes campaign. While many individuals may feel powerless to effect change on their own, as part of a global campaign such as this, their efforts, combined with those of other donors, can create a world of change.
A key launch element of We Can Be Heroes is the campaign’s website, www.WeCanBeHeroes.org.  Here, consumers can make donations which DC Entertainment will match 100 percent (up to $1 million in donations), purchase specially branded merchandise, with 50 percent of the purchase price going to fight the hunger crisis via We Can Be Heroes,  sign up for newsletters and updates, and join the We Can Be Heroes online community.  The site will also feature information on each of the partner organizations and updates on current conditions in the Horn of Africa.
“This campaign goes straight to the heart of our core competency, as Warner Bros. and DC Entertainment both have a rich legacy of telling socially relevant, compelling stories with characters embraced by global audiences,” said Robinov.  “The fact that we’re able to take what we do and use it to raise awareness—and inspire action—around a cause as important as this is gratifying.  With the support of the entire Studio and our Time Warner sister companies, this campaign, like the DC Comics super heroes, will make a great impact on an important issue.”
“The members of the Justice League are an international team of super heroes beloved by a broad range of fans, including men and women, young and old.  This makes them the perfect ‘spokescharacters’ for this campaign,” said Nelson.  “Their dedication to social justice and commitment to band together to defend the helpless brilliantly supports the ideals of the We Can Be Heroes campaign.  The hunger crisis in the Horn of Africa is something we can reverse if we all work together.  I’m proud and grateful we’re able to harness the power and standing of the DC Comics brand and iconic characters as well as for the support from both Warner Bros. and Time Warner that has allowed us to pursue this unprecedented initiative.”
“This is a tragic situation affecting millions and millions of people.  Everyone has the ability to be a part of the solution and efforts such as We Can Be Heroes help bring us closer to that goal,” said Dr. Jill Biden, who visited refugees in Kenya in August and has worked to raise awareness of the crisis.  “I commend the efforts of DC Entertainment, Warner Bros. and other organizations who are using their global reach to help raise awareness of the crisis.”
For more information on We Can Be Heroes, visit www.WeCanBeHeroes.org.  For more information on the campaign’s partner organizations, visit their websites: www.savethechildren.org (Save the Children); www.rescue.org (International Rescue Committee) and www.mercycorps.org (Mercy Corps).
Share