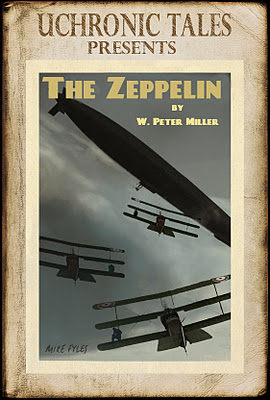 The Uchronic Press is proud to announce “Uchronic Tales: The Zeppelin,” our debut release. This action-packed 18,000 word novella by W. Peter Miller with a cover by Mike Fyles features the premiere appearance of Clark Tyler, a man that trouble seems to find. Or perhaps he is just good at finding it. This story is available now on Kindle, with Nook and all other formats to follow as soon as possible.

The Uchronic Press is here to serve all readers that crave action, excitement, and a bit of an edge in their pulp adventure fiction. Our stories take place in an alternate past, a uchronic world greatly like our own, but with a dash more mystery, danger, and the macabre. Here you will find heroic adventures, outlandish science, ferocious alchemy, mystic forces, and an alternate history just slightly larger than our own.

Uchronic Tales: The Zeppelin features a young Clark Tyler, an American airman caught up in a conspiracy that threatens to turn the tide of the Great War. Reich Zeppelins have been bombing London mercilessly, but the night one of them takes a strange detour could turn the tide of the war. The Germans have kidnapped a mysterious passenger and it is up to Clark Tyler and a band of elite commandos to stop the massive airship Eisern Feist from returning her secrets to the Fatherland.

In the months ahead, danger will put Clark in a number of Uchronic Tales. Look for stories featuring the classic days of Hollywood, earth-shattering danger, lost civilizations, and bizarre visitors from the unknown aether.