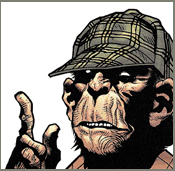 … or how I learned to stop worrying about Michael Davis and love his bombs.

So let’s just get this out of the way. The last Spanish class I took was senior year in high school. I did get an A in it. But between then and now I’ve filled my brain with other more important facts aside from the difference between juevos and huevos. One means balls. The other means eggs. But the one that means eggs also means balls… in the testicular vernacular. My bad.

Those who aren’t following the east-coast-by-way-of-living-on-the-west-coast-vs.-mid-west battle that’s taking place here in the hallowed halls of ComicMix, let me bring ya’ll up to speed. A few weeks ago, Michael Davis applauded DC’s reboot of their universe. He said it was a bold move by the powers-that-be, and while he didn’t love every single thing they did, his praise was for the top brass having the big ones to allow the universal reset. The following week, I said that the praise was silly. The reboot wasn’t really a reboot. It was slapping #1s on every book, rebooting a handful of titles and just assuming most everyone would take all their love and knowledge of the former continuity, and allow it to inform their reading of the new books. I think it’s not so much a bold move, as a lazy one that succeeded in doing exactly what the powers-that-be wanted it to do; it moved product, and created publicity. That doesn’t take balls. It takes a bottom line for net profits.

I was fine to leave the discussion at that: a gentleman’s debate on just how ballsy the move truly was. Michael Davis however, had other plans. He spent this week saying I was now Dead To Him, and proceeded bait me to tell all of you just how a snot-nosed punk (like me) might reboot the DC. For those who didn’t read his pitches, I recommend you do. Or actually let me save you the time; pretend it’s 1993 and go read some Milestone Books. Then look for all of them on the shelves today. Didn’t find ‘em? Me neither. So Mr. Davis, or as I now call you, … Mickey D… let me tell you (and the crowd forming around us) about how I might shuffle things around had I the One Ring, Sword of Omens, The Force, and the last name DidioLeeJohns.

Granted I don’t have the column space to denote 52 pitches mind you, but I’m chock full of ideas. Given the power, here’s a taste of what I’d do, with a real reboot:

Nothing needed to change from what they already are doing in Action Comics, really. Grant Morrison’s return to the Golden Age to draw inspiration makes me love this title and character again. The only thing I’d like to add? Agustus Freeman IV, a prominent member of the secretive “Metropolis Society” takes a young Clark Kent under his wing, to show how him to take his immeasurable power, and use it to the best effect for the greater good. But how does he know Clark’s secret? “I know a Kryptonian when I see one. And I haven’t seen someone from my homeland in 173 years.” Grant and Rags continue their collaboration.

Fighter Pilot-Turned-Astronaut Hal Jordan is manning Ferris Aeronautics’ last hope for a government contract: an experimental small spacecraft using advanced propulsion technology. While out on its first voyage past Mars, a bright green light cuts across the sky. It impacts the red planet, hard. Always one to act first and think later, Highball Jordan lands to investigate. In a freshly made crater, an alien reaches out to Hal telepathically. “There isn’t any time. You must take me to Earth. I must see Doctors John Henry and Curtis Metca–” Before he can end his plea, a red flame engulfs the dying telepath. A vicious alien, with a fiery red glow, and an odd symbol etched into his chest, drips blood from its snarling mouth… hovering above menacingly. It lunges toward Hal. Grabbing the first thing that catches his eye, he flails a green obelisk at his attacker. Splorch! Hal throws the still smoldering crash victim into his shuttle, along with the now glowing green alien-smacker. He takes off towards earth, still pursued by the now-even-angrier blood-spitter. The ship lurches once. Twice. “Hal Jordan of Earth, you have the ability to overcome great fear. The war of emotion rages on. Welcome to the Green Lantern Corps.” A flash of emerald light, and the ship is hurdling towards a strange portal. Over the com system, Carol Ferris yells… “Hal! What’s going on?! We need the Sapphire back in one p–” Written by Geoff Johns. Art by Doug Mahnke.

Detective Chimp and a ragtag group of magically endowed heroes take mystically-themed odd jobs from out of their office… the back of the Oblivion Bar. First case? Getting June Moon put back together again, before the she tears the world into bits! (Hey, I loved this book when this was the pitch, and taking a few cues and characters from the already decent Justice League Dark would give this book a bit more levity, instead of unneeded angst. Plus, magic is cool.) Written by Gail Simone, art by Darwyn Cooke.

Everyone loves the circus… except Carmine Falcone. Don’t blame him though. Hally’s Circus turned down his offer for his family’s “amazing protection and accident insurance plan.” When the big top opened up that fateful night, it would never open up again. The only survivors? Dick Grayson, and Megan Moore. The Boy Wonder and the Girl of a Thousand Faces had their family taken away from them. Inspired by the heroes that have popped up around the world as of late (like the mysterious Batman of Gotham City, the Flash, and Superman) Dick and Megan vow to exact their revenge. But they can’t do it alone. A few Facebook messages later, a team of teens with amazing abilities unite to become the Teen Titans. Better not tell the adults. Written by Judd Winnick, art by Mike McKone.

Of course I have more pitches than these, but well, I only have so much space per week. I think I’ve made my point? The basic gist here is simple… Taking a chance by starting every book over, would allow a whole new set of readers an opportunity to get acclimated to characters they might otherwise feel are too heavy in history to start anew. And old fans can find that love of their characters, with just a few modern twists and a wink and nod. It’d be a move that – dare I say it – would take considerable huevos.

Or, you know… I could just make them all black.