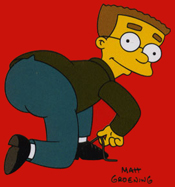 Because I’m trying to kiss the ass of DC Comics.

Well that’s not really true. If you know anything about my history you will know the last thing I’d ever do is kiss ass.

It’s simply not in my DNA not now, not ever. I’ve been in many a situation where a well place smack on someone’s ass would have been very beneficial to me but I just couldn’t do it.

What always stops me is my inability to show respect to those who do not deserve it.

Respect is a very big thing with me. I’d rather have someone’s respect than just about anything else. To get my respect is not hard on a personal level all I really need on that level is for you to treat me with respect and you have mine.

On a professional level getting my respect is not easy. I’m not the guy to tip toe around people’s absence of professionalism. If you have ever read any of my articles on Michael Davis World (plug!) then you may have noticed a recurring theme in my rants: customer service or the lack there of.

I don’t care if you are an artist, IBM or Larry the Hot Dog Vender, if I’m going to write you a check for your services your professionalism had better be your A game.  Anything less than an A game I’ll never work with you or use your services again. You can forget any respect I may have had for you because that my friend, like the old south, is gone with the wind.

Chief among all the reasons I have for liking The New 52 from DC is the massive amount of respect I have because DC went there.

DC comics went where no other comic book company in the world went before: they started over. If the books sucked which they still would have had my respect. There are some in The New 52 that have left me wondering why they went into the direction they went but for the most part I like or love what they have done.

Liking or even loving what DC Comics did with the re-boot creatively is not the main reason I like The New 52. It’s really about respect and balls.

I respect the balls the editors at DC showed in going there.

Every die-hard comic book fan has thought how cool it would be to completely overhaul a comic book universe. The fan forums are filled with what’s wrong with DC, what the problem is with Marvel, or what was Dark Horse thinking? I don’t think there is any comic book universe that is so darn cool that everyone agrees they are doing everything right. I’ll let you in on a little secret; I’m a closet Archie fan. Actually, I’m a huge fan of Little Archie. I’m not sure they even do Little Archie stories anymore but when I was a kid I loved me some Little Archie.

That’s the only comic book universe I had no problem with. The Little Archie universe was perfect to me. Because I was such a fan of Little Archie I tried the regular Archie books.

After reading the regular Archie books for a while I decided if I ran the Archie universe the first thing I would do was have Archie tap Veronica and Betty’s ass.

Hell, I’d have Archie tap them both at the same time. You think that’s bad? Then you don’t want to know the plans I had for Mr. Fantastic.

That’s why it’s good not to have fan’s revamp comic book universes.

Like any young fan, I often wondered why comic book companies don’t do the obvious. Why can’t Uncle Ben come back? Why did Gwen Stacy have to stay dead? Why doesn’t Superman tap the ass of all those people whose initials are LL?

Lois Lane, Lana Lang, Lucy Lane, Lori Lemaris? If I were in charge of the Superman Universe Clark would have had some serious LL booty. I mean the LL list is endless!

Lara Lor, Linda Lang, Lighting Lad, Lex Luthor…eh…wait a sec…maybe tapping all the LL’s is not a great idea after all.  Another reason it seems that fans should not be in charge of universes.

So, as fans we don’t have the power to make massive changes in our comic book universes but why don’t the comic companies make massive cool ass changes a lot more?

Yes. Every so often some new event happens that sorta, kinda, changes stuff but not really. Not like you are I would have changed it.

Massive, cool, earth shattering new shit that will be the envy of all of comicdom!

However, as easy as it may seem to fans to simply hit the reset button it’s not easy at all. You may think as I did when I was just a fan that imagination is all you really need to run a comic book universe and you would be as wrong as I was.

If you are Larry Comics and you started your comic book company a couple of years ago you can reboot all you want and the only people you have to please is your new fan base.

DC Comics has been around since 1935. That’s a lot of history to muck with.

The people at DC Comics just couldn’t sit in a room and decide to do this. That’s not how it works in the real world. The people who came up with the reboot idea had to sell that idea to the parent company and that parent company is Time Warner. Time Warner is one of the biggest entertainment companies in the world.

I’m not sure what kind of relationship DC has with Time Warner. Time Warner could be completely hands off. I doubt it, but that could be the case. DC may have complete control over the comics and Time Warner may not give a sheet.

I’d think something this big would have had to be run up the flagpole at corporate on some level. Again, I’m not aware of DC’s relationship with Time Warner so I can only speculate from my own corporate experience.

I’ve been President or President and CEO at a few entertainment companies and any major decision over a certain dollar amount I made had to be at presented to the powers that be on some level.

When I ran Motown Animation & Filmworks I was hired to create, develop and sell film and television properties. When I decided to do a comic book line, Motown Machineworks, I had to create a business plan, present it to my boss and hope to God it did not crash and burn.

That’s what a lot of fans don’t understand about comics. It’s a fantastic medium and great entertainment, but it’s a business.

Whoever came up with the reboot and then sold the idea to corporate had good creative intentions to be sure but something that big has a lot more to worry about than creative ideas.

Regardless if the ideas were great or if Time Warner is hands off or not, if the reboot would have been a dismal failure heads may have rolled.

This is the real world folks, with great power comes great responsibility is truer in the real world than in comics. Peter Parker fails to stop a guy who then busts a cap in his Uncle is tragic but at any point Marvel could change that.

Real people put their careers in play on some level. I don’t know to what extent those people were at risk if at all but something as big as a reboot it stands to reason that someone’s ass would be on the line if it went south.

It’s easy to talk a big game when it’s not your ass on the line. It’s not so easy when that great power comes with a great responsibility that could result in you having a real bad ending to your story.

That takes balls and that gets my respect.