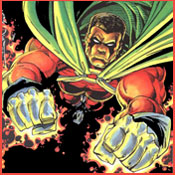 A few days ago Marc wrote that he doesn’t like the New 52 and he took me to task over a few things I wrote in my Why I Like The New 5 article last week.

It seems that Marc, or he who is Dead To Me, or simply Dead To Me as I now call him, doesn’t think DC went far enough with the reboot.

I said in my article that I liked a lot of the books but what I really liked about the New 52 is that DC had the balls to do it in the first place. I also said that as fans of the DCU it would be hard to satisfy everyone with the massive undertaking.

A lot of people hate the New 52. I get that. It’s easy to hate from the sidelines. I do it, you do it, everybody does it. My point was, love it or hate it you have to respect the people that put it all on the line to do it. A lot of people don’t think that matters because to them it sucks and it will always suck because change is bad.

Mar…  I mean Dead To Me, thinks the reboot was an easy out. He thinks DC didn’t go far enough.

Really? Let’s see how you would have rebooted the DCU. You who are Dead To Me. Here’s how I would have done it.

I’d make Batman black and call him Black-Man. He became Black-Man because his parents were shot in a drive-by on their way to Yale where they were both professors of Black History. Oh, I bet you thought his parents were walking in the projects looking for some drugs or some other stereotypical black bullshit storyline.

No! In my DCU there will be no stereotypes.  So Leroy Washington son of Ray Ray and Shaiqua Washington becomes Black-Man!

I’d make the Justice League black and call them the Malcolm X-Men.

I’d make GL black. His name will be John Stewart and his secret identity will be a talk show host.

I’d keep the Flash white. I mean a black guy with super speed? Ron Paul would have a field day with that. “If you have ever been robbed by a black teen-aged male, you know how unbelievably fleet-footed they can be.” Ron Paul said that. Now just imagine if the Flash was black. Nah; I’m keeping Barry Allen a white guy but I’m making him a teen-age criminal who robs people and runs away.

He would stay white too. Everyone knows black people don’t swim…duh.

I’d make WW my flagship book. Why make it my flagship book? To make it clear Michael Davis’ DCU avoids racial and any other stereotypical depictions.For my reboot, I’d make Wonder Woman black. Hell ,in my book she’s already a black woman. She doesn’t take any shit and she’s got a banging booty.

So, Dead To Me, where is your DC reboot? My reboot only features classic characters and it’s taken me 10 years to come up with this new universe. Yes, I started 10 years ago when it was crystal clear to all in the industry that I was going to become head of DC.

After waking up I decided to work on the universe anyway and I’m glad I did because it has certainly come in handy today wouldn’t you say? Yes, 10 years of hard work, research, toil and trouble. I lost a wife with my unwavering commitment to redoing the DCU. Well, actually I was going to call it the MDCU but that’s beside the point.

The point is this type of universe building or rebuilding takes some serious balls not serious eggs like you wrote in your column when you thought you were being clever and used Spanish…wrongly.

It’s obvious you don’t regard research as something you need to do when you create something.

So. I await your universe. If you think it’s so easy let’s see you put the time and effort into it and in 10 years we can talk about it. Or you can knock something out by next week because you don’t have the discipline to take the time to do it right.

I’ll leave you what I would do with DC’s biggest character and the biggest challenge for any DC universe do over, the Man Of Steel…

I would make Superman black and call him Icon.

WEDNESDAY: Mike Gold kicks it up a notch