From Laurie S. Powers’ Blog-
RIDING THE PULP TRAIL is now available as an eBook for the Nook, the iPad, the iPhone, the iPhoneTouch, and the Kindle!!! At the price of $4.99, you get 340 pages of some of the BEST pulp Western stories around! (Not that I’m biased or anything.) 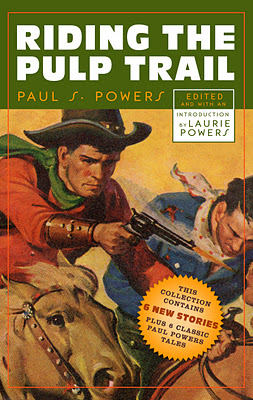 Here are the links to the various formats:


Buy it at the Apple store for iPad, iPhone and iPhoneTouch($4.99)

Here’s what one reviewer has said about RIDING THE PULP TRAIL:

Laurie Powers has been gathering, preserving, researching, and publishing the pulp work of her late grandfather, Paul S. Powers. Here, she has gathered six of his stories that have seen print and six that were previously unpublished in a handsome trade paperback edition. The first story is a reprint, the second unpublished, and so on in that order. There is one Sonny Tabor story. The stories are a delicious mix of action, humor, and colorful characters. All are infused with simple morality and the need for justice in a land where the law is sparse and sometimes suborned by evil. What struck me most about the stories were their seeming freshness, as though they’d been written this year and not 60 or so years ago. Their most pulpish attributes are the titles, which glow purple and proud. A few favorites: “Guns at Jailbird Ranch;” “Buzzards Hate Bullets;” “Judgment Day on Whiskey Trail.”
A huge vote of thanks goes to Laurie Powers for discovering the lost manuscripts, resurrecting the old stories, and making them available in a handsome package. She also contributes an informative introduction detailing her discovery of Paul S. Powers’ career, previously unknown to her, and how she came to gather the stories for this volume. Let’s hope it’s the first of many.