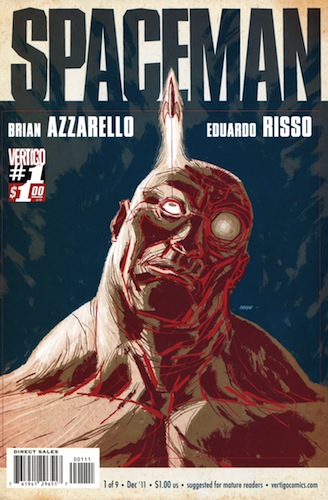 We all know Brian Azzarello and Eduardo Risso work well together. Uttering the duo’s name automatically triggers thoughts of quality. I know for me, the pair rests near the top of creative teams of the last decade. Sometimes, though, I believe we forget how truly great these guys are together. We acknowledge their high esteem in the medium, but after a while we get into the habit of just accepting without truly seeing. We lack the sort of realization you can only experience when you’re sitting down with one of their comics–the sensation that as you turn the page, you know you’re reading something special because your mind is being blown.

Azzarello and Risso do comics how they should be done. These men, along with colorist Patricia Mulvihill, construct sophisticated worlds and atmospheres and then tell you all about in just as sophisticated a fashion. The approach is reserved and cool. The necessary hints are subtly placed, and the reader’s own effort tells the tale. Azzarello/Risso books are, simply said, confident, independent and sexy.

And Spaceman #1 held the crown as the single best comic book of October. Easily.

With Spaceman, we’re told the story of a genetically engineered man who’s life-long purpose was to go to Mars. In reality, his goal was never reached, and when we meet him he’s simply a junkie trapped in a world of decay.

That’s all you really need to know on your way in.  The beauty of the comic rests with how well Azzarello and Risso work as collaborators. A lot of comics these days seem to be one sided. Either the writer conducts the train or the artist. It’s rarely a case where the creative team truly acts as a team. You can see the team play when you read Spaceman, though. Azzarello gives Risso just the right amount of time to convey the narrative via the artwork, and Risso knows when to let Azzarello’s dialogue communicate a piece of information. Mulvihill, as the colorist, adds her own bit as well … highlighting Risso’s line work with hot sears of emotion or simple grays and smudge. Her contribution fills out the tone of the work.

When you consider this team though, it’s odd to imagine them on a hard science fiction comic like this. Azzarello and Risso are known for the crime genre. Whether you take into account 100 Bullets or Batman:Knight of Vengeance, these guys mean crime comics. But here they are doing science fiction, and they’re doing it so well. 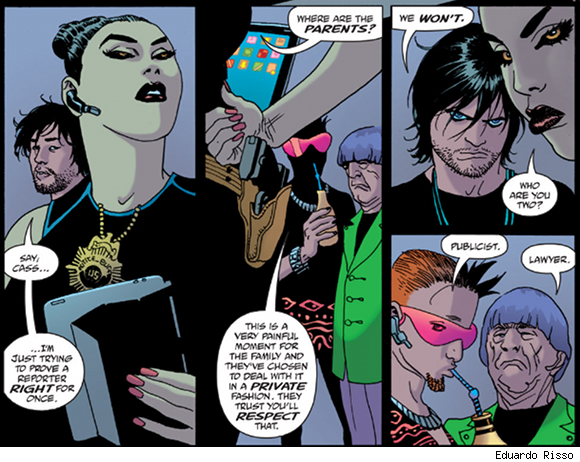 There’s certainly still a street element to the book with the homicide detectives and drug deals, so this could possibly explain the team’s success on a sci-fi book. I’d like to think it’s just simple skill, though. For one, Risso does a bang up job depicting a rundown city. The scapes are big. The rocks…you can feel them crumbling. Shadows cast themselves in all sorts of ways. And, man, the water feels like it may wash away everything at any moment. He does a great job of separating post-apocalyptic from currently apocalyptic. The world hasn’t ended yet, but Risso shows you that the moment is on its way. Azzarello packs the script with numerous cues to build layers into the piece. The script obviously focuses on the main character, but small touches, like the setting, the technology and even the dialects in which people speak, suggest the first few hints of the piece’s core theme: lost potential. Azzarello crafts this script wonderfully and succeeds in setting up this tale while also snatching the audience’s attention.

Where science fiction is concerned, the best of it always seems to really speak to the condition of our world. Spaceman is nothing different. Azzarello and Risso have taken us to world where hope seems forgotten and the future we were promised is unlikely. Like all us, we start out hoping to one day be astronauts. Well, in this book, none of us made it.

TL;DR Spaceman #1 offers an excellent example of creative collaboration in comics, and it sets up what appears to be a very telling science fiction tale.

Spaceman is a new 9 issue limited written by Brian Azzarello, drawn by Eduardo Risso, colored by Patricia Mulvihill and published by Vertigo Comics. You can purchase the first issue in your local comic book shop for only $1.