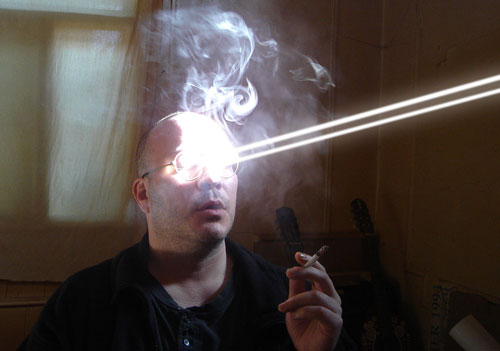 Lean in close. No, closer.

To Get Her is a comic for people who like comics rife with detail and nuance. Set in Montreal,  To Get Her chronicles the oft-fought battles of a ten year relationship, and the emotional casualties inflicted on both sides. In this corner, Gordon Kirby, highly sympathetic cartoonist that quits a paying job washing dishes to return to his art. In this corner, we have Janet Ditko (yeah, Kirby and Ditko, I enjoyed that too) the long suffering breadwinner of the couple who longs for a more rewarding existence. 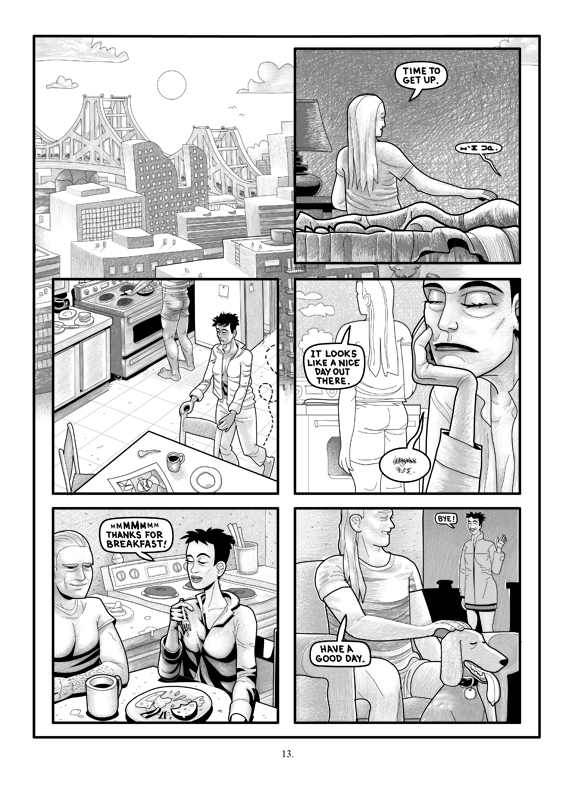 There is also a dog.

More than anything I am struck by the skill with which To Get Her conveys emotion visually. The essence of experience is pumped in to each panel, each line. There are a hundred little details and aesthetic tricks that cause the reader to relate to the story in a personal way that the comic medium is perfectly suited for.

More remarkable still is that this ambitious graphic novel, available for preview on Co2comics.com, is all the brain baby of Mr. Bernie Mireault.

I got a chance to talk with him about his work in an email interview:

Spandexless: What was it that drew you to create art in the comic medium?

Bernie Mireault: I do art to entertain myself. I think Fine art takes itself far too seriously and was delighted to find the comic art medium largely free of these pretensions. The stigma attached to its practice seems to keep the field clear of all but the most dedicated practitioners, which is good. I love storytelling and comic art is such a potent, effective tool for that, I think it’s a wonder that more artists don’t participate.

S: There are surely infinite other paths of self expression that would draw more wealth and respect, what was it that made you look at comic books and go “that’s for me.”

BM: Wealth and respect never mattered to me beyond the basics. That’s what I think of as external stuff and I try to focus on the internal; on following my heart, as maudlin as that may sound. I think of comic art as a calling, like a religious person might feel to enter service. I guess what drew me into comic art specifically out of all the arts was that I liked the format  so much [comic books], but not so much the content. I wanted to use the same tools and conventions, but to have the satisfaction of doing it in my own way, which is just a mishmash of all the stuff over the years that I’ve seen and liked and either consciously or subconsciously taken from, and to get to see if it “worked”. Opinions are mixed on that, but it’s never stopped entertaining me.

S: To Get Her departs from your previous work noticeably, both in length and tone. While the short stories of yours I’ve read are highly surreal, To Get Her is shaping up to be a romantically inclined slice of life. Why the change?

BM: I’ve never had a collection of my work on The Jam before [though I aim to remedy that soon myself, there’s 400+ pages of the stuff] so I was fixated on getting a big book out there and this time around I thought I’d try to do a “graphic novel”, which to me means a big comic book with a beginning, a middle and an end, all in one place with a spine. I had never attempted such a large project before and I chose a topic that means a lot to me; romantic relationship dynamics, to provide me with enough inspiration to get through the work. I think of To Get Her as a dystopian romantic comedy and a plea for understanding from cartoonists to their civilian mates, at the very least proposing some basic ground rules for more humane relationship breakups. I think of the first paragraph on page 1 [also featured on the back cover] as my thesis statement.

S:How does your process differ when doing a graphic novel versus some five page piece without dialogue? Did you have the whole story inside you, or has it evolved as you created it?

BM: Usually everything evolves as I go. I’ll start with little pencil thumbnail sketches but by the time the art is committed to the page it will have probably changed many times, as you think of things and refine stuff. Sometimes I’ll have an idea for a complete story all at once, but usually for me it’s like building a wall, one brick at a time, until you’re done. I like to have the freedom to change direction and follow my intuition. That helps to keep the process always fresh for me. 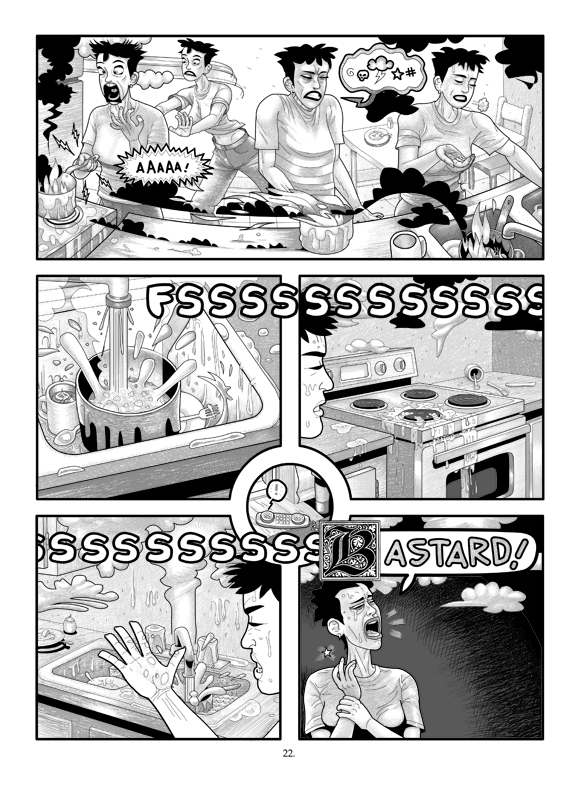 S: You were awarded a grant from the Xeric Foundation to produce this graphic novel. What is the Xerox Foundation, and how did you get them to give you money? How big a part do such grants play in the life of a professional cartoonist?

BM: [You can read] a press release I wrote that answers the first part of your question in some detail.

S: How big a part do such grants play in the life of a professional cartoonist?

BM: In the case of me and To Get Her, quite a lot. The project all started when I applied for and received a writer’s grant from the Canada Council for the Arts in 2004. The project became To Get Her and took a while to complete, not being able to work on it full time. Then I applied for the Xeric grant, thinking that self-publishing this project would give me best satisfaction and closure. Actually getting the grant now gets me going on making the book a reality, so I guess I’m in debt to these grants for stimulating the creation this work 100%.

Applying for a grant is an excellent thing to do when you’re down in the dumps. Highly recommended.

S: and what about Co2comics.com? What’s their deal? How did they come to be hosting your work?

BM: Bill Cucinotta is one of the original founders of Comico, the comic book company, the original publishers of Matt Wagner’s Mage and Grendel series. Matt Wagner moved to Montreal [where I live] briefly to be able to live with his wife-to-be.  I was working on Grendel at the time and Bill was one of people I met through Matt during that period. We ended up collaborating on a short story Bill wrote and drew and I inked, called Death for a Dollar and when he and fellow old school Comico alumni Gerry Giovinco started CO2comics.com, they invited people who had a Comico connection to participate and I thought why not? It encouraged me to update my inventory, coloring old short stories. I enjoy the association.

S: The protagonist of To Get Her is a kind hearted struggling cartoonist. Could it be slightly autobiographical?  Do you often find it beneficial to use your own life and experiences in your work?

BM: Sure, plenty of stuff there is inspired by actual events, but then either exaggerated or under-played, and thus fictionalized. By plugging in and adapting these real events you get to capitalize on your memory and emotional impressions to give the work more depth than if you just made something up out of thin air. I try to adapt that autobio energy to make fiction.

S: Is there any overall message or feeling that you want your audience to take away?

BM: To be kind to each other. To try to empathize with others more.

S: When you’re drawing, do you think about a stranger’s eyes moving over the page?

BM: Sure! For this project I stick to what I think of as the the classic Kurtzman 6 panel grid, with occasional variations. Very even, regular layouts. Very conservative and traditional for the most part.. Hopefully smooth as well.

S: I understand you are also in a band that goes by the name of Bug Eyed Monster, can you tell us about that and the connection between comic books and pop music?

BM: I’ve always written songs and been in bands and it’s a lot of fun and a great pastime that I would recommend for everyone. Like Nike says:Just do it. These days I don’t perform publicly though I have such great musical collaborators that I’m looking forward to showing that off sometime soon; they make anything I do sound like a million bucks! I’d like to develop that side of things more by creating an event that actively incorporates live music and comic art in a unique and entertaining way, with books on sale off to the side.  I feel like comic art and a pop song both try to do the same thing; tell a story or present a thought. Music has a huge advantage there; sound is so much more immediate and a song is usually brief enough to not test the limits of shorter attention spans. Many, many do not possess the ability to sit still long enough to read through anything and literature is lost to them in this age of YouTube. I’m not complaining; I think it’s perfectly understandable that the average person won’t read when they can have something read to them with accompanying visuals via the internet.Perhaps by incorporating music into the over-all package I’ll be able to get the work over to more people through those channels.

BM: To consolidate my inventory and get it into print myself and keep it there. To be an ambassador for the medium to the layperson and foster its acceptance and growth. To make movies and music as well, like Mike Allred. To help contribute to the development of the comic art medium.

I’ll leave you with a link to the comic in question, and a song from Bernie’s band, Bug Eyed Monster.

Matthew is a lover of Comedy and Tragedy in all of their forms; particularly the forms of Comic Books, Theater, and Hip-hop. When not passing himself off as an actor or writer, he works with the mentally afflicted in New Haven, CT.