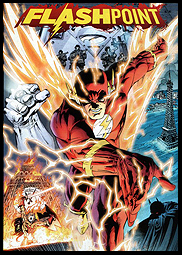 This is the week when everything is supposed to change. The first of the New 52 comics is on the stands. Since better  folks than me are weighing in on the new stuff, I want to talk about what went right before.

While I like team-up stories, I’m not a big fan of “After today, nothing will ever be the same again” hype. Not because I’m against change, but rather because change is constant. After every day, nothing is ever the same. In reality, this hype usually means a bunch of characters will be killed. Death is the substitute for drama in modern comics.

I didn’t like Supergirl’s death in Crisis on Infinite Earths. Kara has always been one of my favorite characters, even though she was rarely written well.  Her love interest was named Dick Malvern, for crying out loud, which I always understood to mean Bad Green Penis. I thought her death was a symbolic admission that the men who wrote comics at the time didn’t understand girls.

Ever since, there have been company-wide, month long crossovers where nothing will ever be the same. This year, the promise was backed up by 52 Number One issues that will be published the month after the crossover ends.

So what happened in Flashpoint? Damned if I know. As near as I can tell, it was a five-issue Bill & Ted adventure, except that instead of Bill and Ted remembering to travel back in time to leave themselves a note telling themselves what to do in the past, there was Flash, a Cosmic Treadmill, and no George Carlin. And a lot more carnage.

Why is this necessary? I mean, I actually enjoyed the Flashpoint mini-series, but they would have been just as satisfying as Elseworlds, and that would have allowed the creators to let loose even more. Is it really this complicated to jump through these hoops to wipe a slate clean?

Why can’t we just agree that the old continuity is gone, and get on with telling stories? And if, for whatever reason, some of these stories aren’t successful, why can’t we let a new creative team come in and start from scratch again?

When I first started writing comics, an editor (sorry, I forget who) told me that no one wanted to read comics written by someone’s mom. In this case, though, I think comics could certainly use someone who simply said, “Because I said so.”

Dominoed Dare-Doll Martha Thomases thinks there should be more George Carlin in comics, and everywhere else. Read her political stuff at michaeldavisworld.com every Saturday.