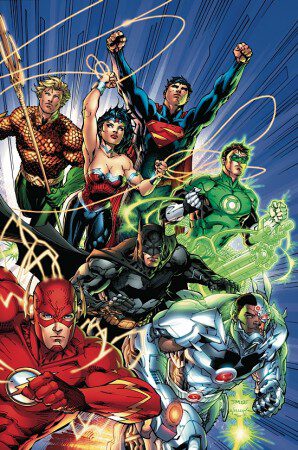 Finally, DC’s new 52 launches (or is that relaunches?) today in stores and online with Justice League #1, written by Geoff Johns and pencilled by Jim Lee, with inks by Scott Williams, colors by Alex Sinclair, and letters by Patrick Brosseau. I’m here with my tag-team partner in the caption box, Marc Alan Fishman, and we’re going to review this in real time. I’m writing the introductory information while Marc finishes up a different project and then reads–

OK. I couldn’t help myself. Read it.

Me too. Wasn’t that quick?

Yeah, and not in a good way. That was… terrible.

Wait, wait, wait. There’s a lot to like here, except the portion size.

I’m gonna take a hard stance on this. If I knew nothing of these characters? I didn’t find this appealing.

But seriously, how many people know nothing of Batman and Green Lantern?

That’s kind of my point. There was a lack of substance to the issue that reeks of everything I hate about comics from the 90s. The art is all flash, bangs, pops, pows, and gloriously meticulous fire / lasers / constructs … But seriously? If this were an animated episode? We just got the first 5 minutes.

10 minutes. But yes, it feels like too little, and that’s a problem.

And what exactly did we learn? Batman’s a cocky SOB, and GL is even cockier. And Superman? Even more? It was like the issue was on autopilot. It’s all establishing shots. Fine, I get that. But this issue is supposed to herald this huge coming together of heroes for the superlative team of all comicdom. If I am a new reader? I’m coming back, or more likely? I’m feeling short changed.

So it’s too short— Act 1 of the animated movie. And even the premiere of the Justice League animated series needed three episodes.

Well, being short would be the first of a few big gripes. I don’t mind a quick read comic… Hell, plenty of Ultimates Volume 1 was that way. My bigger concern is the writing. I feel like the whole issue was bullet points. Minus the Cyborg scene. It was the ONLY time where I feel like we stopped, to catch a breath. The first scene, which has been in previews for months (?) plays for its simplicity; we establish the baseline that “5 years ago” heroes weren’t accepted. But then that same sequence just carries us to the logical (as in PREDICTABLE) beats. There wasn’t anytime where the characters stopped to say anything more than “this is what the plot is telling me to do right now.” … “Let’s go do this, and then do that. And hey did you hear about this other obvious plot point?”  “Yes. Now, let’s continue to nip at each other while something else blows up.” Is it too much to demand a modicum of depth from these characters?

In 23 pages? That’s a lot to ask for. Granted, out of those 23 pages, we have two full page splashes and a double page splash spread.

Pretty, but look how much that cuts down on just why we’re getting so little to work with. Like I said… the trope of the 90’s reborn… Style over substance. I just picked up my copy of Runaways #1. It’s 24 pages. In 24 pages, I got a beautiful snapshot of 6 different lead characters, their parents, their home lives, their personality, AND it ended on a real cliffhanger, NOT just a splashpage. Don’t get me wrong. I want to like this book. I want to celebrate Johns and Lee pushing themselves. But I read this issue, and just reread it to make sure I wasn’t just being mean for mean’s sake… It just feels sloppy to me.

Compared to The Brave and The Bold #28, the first appearance of the Justice League of America, we had 25 2/3 pages.

Having not read the “first” appearance of the Justice League, I can safely assume it had more going on than Batman and GL having a pissing contest?

Yes. Now, of course, that original story spent no time introducing characters, and only defeated Starro because Snapper Carr was covered in lime.

Maybe that’s something to think about, though. It’s one of the first things I was told in writing classes: Don’t waste time. It’s a safe bet everyone has seen Batman flipping and jumping, and using gadgets. Same can be said about GL ring slinging. Why waste splash pages on it again, here, when Johns could use the space to really challenge the readers with the concept of a NEW universe.

Here’s one simple complaint— where’s Barry, Diana, and Arthur? We see them on the cover, and they’re nowhere inside.

That simple complaint informs my too-complex one. I’d sooner cut two or three pages of the whining and posing for a glimpse of Flash, Wonder Woman, and Aquaman. I will point out again, I think the best part of the book was the Cyborg story. It’s the first time … well… ever… that I think I’ve cared about the character. He’s assured the Kyle Rayner position on the team. Now there’s a good thing to go look up. Do you recall what Morrison’s first trade of the JLA was?

Even better: just looked over Whedon’s Astonishing X-Men volume 1. In 24 pages, with a 2 page splash and 1 page splash, we STILL get the entire team, with five of them getting actual… moments.

But now you’re trying to have it both ways. Either introduce the characters and how they interact, or assume the audience already knows and just move forward.

True, true. So, I’ll be direct: This SHOULD have been an introduction.

It is, of a sort. We know the characters, we’re introducing the relationships between them.

With little to no nuance. “They don’t like us.” “I don’t like you.” “What’s your power?” I think if they had started with a different relationship, this issue would have been stronger.

Hey, I’m just happy the first meeting isn’t fighting each other. On the other hand, we’ve also seen that Batman and GL have had a… strained relationship.

I think that could easily have been established in less time than it took in this book. If we’re existing in the era of always writing for the trade… there’s time to continue the animosity. 20 pages worth got a little grating to me. You know the biggest thing this book is missing for me? Hope and Fun. Justice League #1 for me has far too little incentive to feel like sticking around. I won’t buy the issues, but I’ll happily bum them off Matt or Kyle, who are both committing to them. I think my money is better spent elsewhere.

The problem, as with reviews of too many stories today, is that it’s reviewing the first part of a larger story. I’ll read issue #2, but I hope the pacing improves.

What about you? Justice League #1– wanna make something out of it?