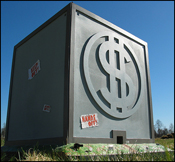 From time to time I’m going to use this space to talk about professional concerns gleaned from my experiences of the past twenty-five plus years in the industry and pass on words of advice that I got in that time.

For example – if you go to a Convention and you’re a pro, you’re probably going to be asked to autograph copies of your work. Here’s something I didn’t know when I began and was taught by another pro: keep your autograph separate and different from your legal signature (the thing you sign checks and binding contracts with). Walt Simonson, for example, has a great autograph – looks like a dinosaur. I doubt he signs his checks that way. It makes sense. If your autograph is the same as your legal signature, it makes it easier for someone to forge that signature and that’s not good.

Here’s another bit of advice. I was once negotiating a contract at one of the major companies and I had a question about something in the contract that no one could answer. I was told, “Oh, John. Just go ahead and sign it. We’re all family here.”

My answer was – no, we’re not. I know who and what my family is and the company isn’t it. I applied my “Hit By A Bus” theory which goes as follows: if everyone I knew (and liked) at a given company all went out to lunch together and they were all hit by a bus and killed, all I would have would be the contract as written.

I have lots of friends at lots of different companies in lots of different positions ranging from editorial to management to production to the business end. They’re all personnel and can be promoted, demoted, fired, leave, and so on. The company itself can merge with another, change divisions, be sold, be bought, and more than one has gone out of business out from under me. Businesses will make business decisions that are usually based on financial reasons. The famous line from the Godfather, “it’s not personal; it’s just business” remains true.

I don’t fault businesses for that. It’s what they are. I may have friends at a certain business and, yes, I often depend on them to be friends. I never expect a corporation to be my friend. I don’t care what a commercial that’s trying to sell you something tells you to the contrary. A business is not your friend and certainly isn’t your family. They are a corporate entity and they will act like one. Don’t expect anything different.

Short form: read the contract, any contract, and know what you’re getting into. If you need a lawyer to explain it to you, get one. Don’t take the word of anyone working for the company as to what it means; make sure it’s someone who is not part of the corporation. That’s true outside of comics as well as in. If it isn’t in the contract, it doesn’t exist legally. There is no “understanding,” there’s only what’s on paper. Know that before you put your legal signature – not your autograph – on the dotted line. You and your family will be happier as a result.

And watch out for killer buses.