NEW REVIEW COLUMN DEBUTS-CAN I BE FRANK ABOUT MONSTER HUNTERS? 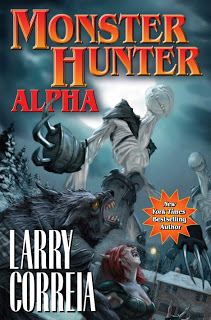 Vampires coming up the front path? Zombies on the lawn? Maybe werewolves howling and keeping you awake at night? Then you might want to look up the MONSTER HUNTER series of pulps by rising scribe, Larry Correira. Three books in the series are MONSTER HUNTER INTERNATIONAL, MONSTER HUNTER VENDETTA and the recently published MONSTER HUNTER ALPHA, all of which are available in bookstores, online as well as electronically through Baen Book’s website.
These true modern pulps tell the tale of  Owen Zastava Pitt, an account with a love for nasty fighting and upbringing that included training a Green Beret would find arduous. Attempting to live a normal life, Pitt is one day attacked by his supervisor who was unfortunately recently infected as a werewolf.
This setup plunges the hero into a world of vampires, ghouls, zombies and government paper-pushers that have terrifying secrets of their own. Owen Pitt is soon recruited by a private company of monster hunters, all of whom are fun and interesting characters in their own right. 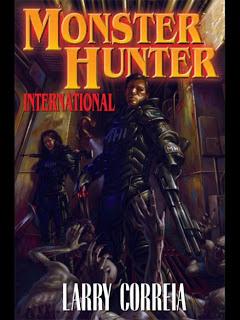 Correira, a weapons expert as well as a former account himself, provides the reader with an astonishing level of detail unseen since the days of Don Pendleton’s Mack Bolan War Against the Mafia series. It should be said that most writers who place this level of detail in a series often bog the story down in minutia, but Larry Correira manages to rise above that pitfall and provide the reader with just enough information to get you move involved in the story.
As a hero, Owen Pitt is reminiscent of the pulp heroes of the Western yarns; he’s strong, amusing, self-effacing and confident without becoming a “Mary-Sue”. If you don’t understand what a Mary-Sue is, feet free to pause this article and look up the term on Google (and maybe read the Conrad Stargrad stories by Leo Frankowski). In any event, he plays well off the other protagonists, especially the terrifying FBI Agent known as Franks. That character’s backstory alone is worth the price of admission. 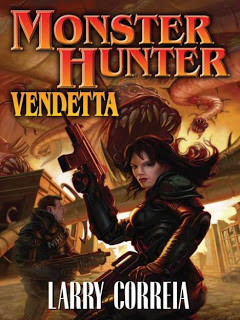 The true pleasure of Larry Correia’s series lies in his world itself. Monsters such as vampires and werewolfs exist and have their own sets of rules. These rules derive from legends as well as great films from the Universal and hammer series and no doubt other sources. Other, equally terrifying and interesting creatures exist and provide the reader with plenty of excitement as well as fast paced action. The approachability of the characters allows the reader a better connection with the story, preventing a feeling of disconnection one often gets in action and adventure tales from new and historical pulp.
To sum up, if you want some modern pulp horror with a fun does of action, not to mention beautiful women and clever dialogue, Larry Corriea’s Monster Hunter series of books. I’m betting you’ll have a good time in the process and, like me, will be looking forward to the continuation of this enjoyable series of tales.
Share