JOHN OSTRANDER: How Piracy Made Me A Comic Book Writer 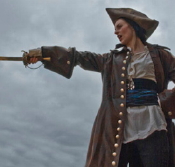 One of the questions I’ve been asked most frequently over the years has been “How do you break in to comics?” – usually by someone looking to break into comics themselves. My standard answer is, “Through the roof with crowbar in the dead of night.” The true answer is – I don’t know. I got into comics because Mike Gold, who was then starting up First Comics, was my friend and liked my work as a playwright and knew I really loved comics and wanted to see what I would do given a chance. So I guess my answer is, “Make friends with someone who will someday become an editor and give you a shot. And then don’t screw up.” Not the easiest advice to follow.

The main reason Mike gave me a shot was one particular play – Bloody Bess – that was co-written by myself and my long time friend, William J. Norris, with Stuart Gordon on plotting assist. The play was performed first by the legendary Chicago theater company, The Organic Theater, and you may know some of the people involved back then. Stuart was founder and director and, if you know him for nothing else, you must know him as the director of the film, [[[Re-Animator]]]. You may know some of the actors who were involved such as Meschach Taylor (Designing Women), Dennis Franz (NYPD Blue), and Joe Mantegna (Criminal Minds, Fat Tony on The Simpsons).

The play was begotten because Stuart wanted to stage a Jacobean revenge tragedy but he couldn’t find an actual one that he liked. It was the height of Watergate and Stuart claimed you could smell the desire for revenge in the air. So he decided to commission a new one. It was about pirates because we were also aware of two actual female pirates – Anne Bonny and Mary Read.

Mike liked the play a lot and came more than once to see the show. All of which brings us to the real reason to write this particular column – to re-tell one of Mike’s favorite stories from my theater days.

The play was very physical and the actors sometimes would get hurt; although I wasn’t one of the actors on opening night, I was eventually drafted into service. I played Captain Van Anders, the captain of a merchant ship in the first scene whose ship was boarded by the pirates. In short order, Van Anders is trussed up, slung up in the air by his heels, and makes a valiant, defiant speech to his captors, saying, “You may kill me now, but my words, my words they shall live…!” At that point, as written, one the scurvy pirates growls contemptuously, “Your words!” and draws a blunted knife across my throat. I release the blood bag hidden under my costume, and bleed to death in front of the horrified audience members, some of whom – in the small but lovely confines of the theater that the Organic occupied – were about four feet from my twitching body.

At that point, my esteemed co-writer, the aforementioned William J. Norris, was playing the pirate who slits my throat. One night, I got to my speech, and as I said, “My words, they shall live…!”, my great friend Bill starts to saw on my throat with the knife, adding, “Your words, you fat turkey? Your words?!”

My twitching was particularly vivid that night as I tried to keep from laughing.

Ladies and gentlemen, that was the play and that may have been the story, that convinced Mike to give me a shot at writing comics.

And the rest, as they say, is history. Or hysteria. Take your pick.