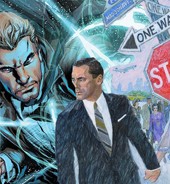 Mad Men starts its sixth season this weekend. I won’t be able to see it because I’m out of the country, but my cat sitter has strict instructions to set the DVR, so I expect to be up to speed anon.

The last season ended in 1967. I’m not sure whether this new season will pick up immediately after the last one left off, or if it will jump forward a year or two. In any case, the late 1960s were a time when any average Tuesday had more drama and conflict and human interest than all of the 1980s combined.

The advertising for this new season, at least as seen in the posters in the subway, hint at some of the challenges we can expect to see. Buttoned-up Don Draper versus a chaotic world.

Which brings me around to comics, and the points I want to make this week. For as long as I can remember (which doesn’t include the late 1960s, by the way, because that’s what the late 1960s were like for me), comics fans have bemoaned the fact that comics don’t advertise. If only comics reached out to people the way books/movies/television do, we’d have a mainstream medium.

I don’t think it would make any difference. Comic companies don’t know how to advertise.

Let’s look at an ad for an upcoming series I anticipate eagerly, the new Constantine, written by Jeff Lemire, with art by Ray Fawkes and Renato Cuedes. John Constantine is one of my favorite characters.

The ad shows Constantine sitting in a graveyard, slouched against a tombstone with his name on it, smoking a cigarette. There is a vase of red roses at his feet. Zombie hands are reaching for him, and there is a drooling zombie behind him. A skull rises from a grave to his left. There is a logo above his head, and above that is the line, “Playing with magic always comes with a price…”

If you didn’t know anything about the character, or the creative team, what would this tell you? It seems to depict a guy who is so lackadaisical about the undead that he can relax with a smoke. Where is the tension? Where is the drama?

What’s in it for me?

The best advertising suggests a benefit for the consumer. It elicits an emotional response (and if you don’t believe me, watch any episode of Mad Men in which Don Draper explains things to the client). Perhaps my dishes will be cleaner, my vacation more glamorous, my beer-drinking nights more fun. Successful advertising for entertainment promises me emotional highs and lows, laughter and/or tears. It promises me that I will experience something I’ve never had before.

Perhaps DC assumes that, since the ad is running in their books, the reader knows who the character is, and what the creative team can do. Perhaps they think this information is enough to motivate someone already familiar with the work.

After all, the Mad Men poster I praised earlier is just a picture of Jon Hamm walking down a city street. In this case, however, the average media consumer knows about the show, and even if that person doesn’t watch it, Jon Hamm is regularly in movies and other television shows, reaching an audience outside the show’s usual demographics. By using a master of advertising illustration from the same era as the show, the ad evokes the time period. The composition implies a tension that is at odds with the soft colors of the background.

My curiosity is piqued. I can’t wait. Anticipation achieved.

The DC ad does none of this. And until our industry learns how advertising works (and, no, this doesn’t count), we don’t deserve nice things.