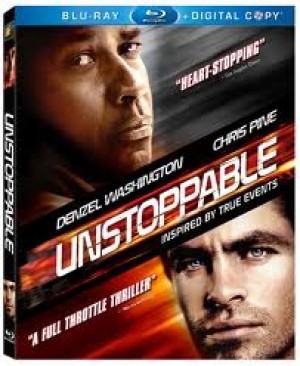 Director Tony Scott can always be counted on for visually compelling movies with razor-thin characters. His most recent offering, [[[Unstoppable]]], is now out on DVD from 20th Century Fox Home Entertainment and makes for a mindless viewing.

The film is based on a true story but was amplified beyond recognition as two train men risk their lives to stop a runaway train under full power before it could destroy lives and property with its toxic cargo. Newcomer Will Colson (Chris Pine, showing more range than his Jim Kirk) is paired with the grizzled veteran Frank Barnes (Denzel Washington, playing the same everyman he played in the remake of [[[Pelham 1-2-3]]]) as they take 1206 out to collect freight cars. At much the same time, careless workmen at a rail yard allow a freight train to get away from them and without the air brakes attached, it becomes a “half-mile long missile” heading into rural Pennsylvania.

Obviously, it’s an action movie so the tension is nicely ratcheted up with fast cuts between the two trainmen, the runaway, the operations center, and the general public. Scott handles this well so you’re deep into the movie before you realize the characters aren’t particularly deep. Colson has family ties to the business, earning him contempt from the veterans, plus is estranged from his wife and son, which preoccupies him. Barnes has seen it all before and knows more than the executive and shows off his know-how time and again, devoting everything to the task at hand despite knowing he is being forced into early retirement in a mere three weeks. Watching them come together to bond and save the day should have been a more rewarding experience.

Rosario Dawson as the train controller is the best supporting player in the film and does a good job with a thankless part.  Everyone else arrived from central casting so the higher-ups and CEO are all clichés, offering nothing diverting to the overall story.

The cookie-cutter feel to the story surfaces now and then but Scott and his editor Chris Lebenzon, keep things briskly moving.

The Blu-ray transferred nicely so looks crisp with good sound. The movie is accompanied by a dry audio commentary from Scott or you could listen to “Tracking the Story” a series of tape recorded conversations between Scott and screenwriter Mark Bomback. The latter should have been more revealing and interesting.

Then there’s “The Fastest Track: Unleashing ‘Unstoppable'”, a 29:41 featurette on the film’s complicated production. Unfortunately, by now there should have been some detail on the true events that launched this jet-fueled version but no one seems interested in reality. “Derailed: Anatomy of a Scene” (10:01) shows how the train derailment moment was prepped and filmed, proving that some things look better in real life than a CGI-generated version. Similarly, “Hanging off the Train: Stunt Work” (14:25) shows how hazardous it can be for the true action heroes. Less interesting is “On the Rails with the Director and Cast” (13:25) as Scott, Washington, Pine, and Dawson talk briefly about making the film.

Entertaining with easy-going performances, this is worth a look.