Chicago’s new mayor isn’t the fake one we actually wanted. 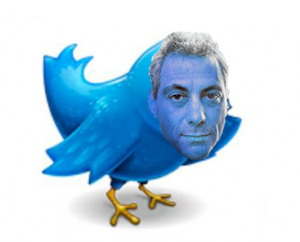 Listen up, you mutha-cluckers… Chicago has a new boss in town. Why does this matter to you? Because I said so. Why did I say so? Because the Second City is known for a few big things: The Chicago Style Hot Dog, Deep Dish Pizza, Da ’85 Bears, and maybe just an eensy-bit of good old fashioned corruption. But now it can be known for one more big thing. Our new mayor? Former White House chief-of-staff Rahm “The R-Bomb” Emanuel. When our current boss mayor, Richard Daley announced he’d retire this year from his post… Emanuel left his job in Washington to take his home city by the horns. But it’s been a long journey to get there. He took 54% of the vote, despite having his Chicago residency being challenged. He beat out the former city chief of staff, the former city clerk, and a former U.S. Senator for the title. But if you ask me? He didn’t beat one important candidate, his psuedo-self. In a paradoxical sub-dimension high atop City Hall, in a secret greenhouse known only to our beloved Mayor Daley… and @MayorEmanuel, the dimensional doppelganger of Chicago.

What’s that you say? You’ve not heard? @MayorEmanuel is the twitterverse’s Rahm Emanuel clone. The account started shortly after the “real” Rahm declared his intention to run. And boy did things escalate from there. @MayorEmanuel’s story unfolded over the months, and became an epic yarn with a full cast of characters. It began as a string of foul-mouthery perhaps poking a jovial jab towards the obvious; Rahm is known for his temper, his drive, and his competitive nature. He raised 11 million dollars to take his campaign to the streets of Chicago. He shook hands and kissed babies. We can only assume he attended secret cabal meetings, and struck backroom deals that we kindly city-folk won’t find out until they hit the nightly news a few years after his mayoral run ends… if it ends. His twitter counterpart followed the whole ride, as only a comedic four-letter-word-dropping twitter clone could do. And as the race for mayor drew closer to the vote, so did the drama.

Twitter to many is just that little corner of the interwebs where we drop a snarky one liner, or tell people where we are at. It might be a place for celebrities to tell us how normal they are, shopping for soup and whatnot, or how not-normal they are, like other Chicago Celebutaunt Kanye West. @MayorEmanuel used twitter to create a piece of short fiction (OR IS IT!?) that was truly original. A few bloggers followed the best of the posts and relayed just how awe-inspiring they were. And important people took notice. The “real” Rahm made and attempt to bribe his twitter-sibling with a donation to charity, to “out” himself. Smartly the anonymous fingers behind the 140 character-at-a-time hasn’t shown his face. Perhaps he escaped down the aforementioned time well in his tweets.

Give a gander at the saga, and kick yourself for not living here (that is, if you don’t…) and living through this live alt-meta-super fiction happening. In the mean time, the real Rahm is prepping his mayoral suit, and perhaps, setting aside a bit of our future city tax dollars towards a special “find @MayorEmanuel and break his hands” task force. I think I’ve said too much. All Hail Rahm! All Hail Rahm!