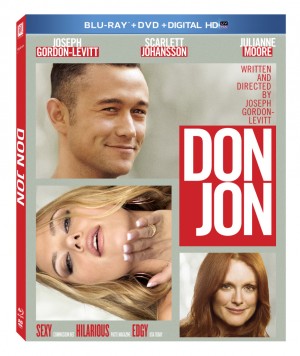 As a result, there are men out there who go to clubs, get laid and surprisingly remain unsatisfied. Multi-hyphenate Joseph Gordon-Levitt has been giving this kind of male some thought, dating back to 2008, and turned it into an interesting meditation on the matter in the entertaining Don Jon. Gordon-Levitt wrote, directed, and stars in this snapshot of the East Coast male. His Jon is a man of principals who includes taking pride in his home, his body, and in his immortal soul as witnessed by his weekly visits to the confessional. Still, he enjoys frequent one-night stands and when the women prove to be real and not the willing fantasy images on his laptop he returns there, frequently, to satisfy his needs. It’s an addiction to which he is totally blind.

He’s seemingly content with his minimum wage job in the service industry, a devoted son to his parents (Glenne Headley, Tony Danza), and lacks ambition. That begins to change when he spots the hot Barbara (Scarlett Johansson), who was raised on the romcoms of the last two decades and whose expectations of the perfect mate are equally unrealistic. But they have chemistry and he before she has sex with Jon, she begins to reshape him. First, she convinces him to go to community college and then forces him to give up porn, which he tries to do but resorts to watching on his phone, even in class, which catches the amused eye of Esther (Julianne Moore). She playfully gives him a DVD of erotica which he rejects out of hand, not understanding the difference or her interest in him.

Bit by bit, we see the stresses on Jon and Barbara’s relationship which oddly shatters at Home Depot when she refuses to let him buy Swiffer refills because men don’t do that. As they drift apart, Esther, who has been recently widowed and has a more solid grip on the world, turns out to be the one who shows Jon there are ways to be satisfied with a friend/partner/lover. Their age difference barely comes up and there’s a sweetness to their story.

Gordon-Levitt plays everything on an even keel, never overly exaggerating the actions or characters, infusing each act with its own look, feel, and sound, subtly guiding the audience through Jon’s final maturation into adulthood. The performances are uniformly strong from Johansson’s gum chewing Jersey girl to Danza’s short-tempered dad.

The film, out on a combo pack (Blu-ray, DVD, Digital) now from 20th Century Home Entertainment, looks great in high definition. There’s a satisfactory assortment of special features including the Making of Don Jon, where Gordon-Levitt nicely credits his varied collaborators; Don Jon’s Origin, a look at the writing process across the years; Joe’s Hats, writer, director, star; Objectified, a look at gender roles; Themes & Variations, a nice look at each act’s unique feel. Finally, there are four HitRECord Shorts, where Gordon-Levitt invited people to submit their creations on the same theme which occurred during the making of the film.