Review: The Simon and Kirby Superheroes 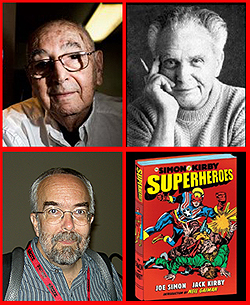 Pound for pound, you’re unlikely to find a better
superhero collection than Titan Books’ The Simon and Kirby Superheroes

. It weighs in at 4.2 pounds and, at
Amazon.com’s $32.97, that means you are paying fifty cents an ounce for the
stuff that made Joe Simon and Jack Kirby legends.

You might not have heard of some of these characters –
Stuntman, Fighting American, Vagabond Prince, Captain 3-D (in 2-D, but now in
color),[[[Private Strong]]] (the Shield #2), and [[[The Fly]]]. Over the decades many have
been reprinted; this book also includes a number of stories that had never been
published. All are gems. Every one of them. All 480 pages of them.

Of course, Simon and Kirby are better known for their
Marvel and DC creations: [[[Boy Commandos]]], [[[The Guardian]]] and [[[the Newsboy Legion]]],and – most prominently – [[[Captain America]]]. All of these stories have been collected in hardcover in recent years, along with their work on DC’s Sandman
series. OK, for the nit-pickers in the audience, the Boy Commandos volume ships from DC at the end of November.

As fond as I am of these creations – and Captain America
is as iconic a costumed hero as they come – I have always been more
enthusiastic about the characters represented in this mammoth tome. The action leaps off the page, the stories
border on the outrageous and the concepts are pure unbridled fun. Their own
company published some, others were published by Archie Comics or Harvey
Comics. I gather their editors simply gave them more latitude; certainly, the
corporate structures were obviously more willing to bend to Simon and Kirby’s
strengths than the uptights at Marvel (Timely) and DC.

In other words, when it comes to Simon and Kirby
superheroes, this is the real stuff.

Kudos to editor Steve Saffel, who has spent at least four
years working on this series of books along with Joe Simon (age 97) and his son
Jim. It’s the second volume of the Simon and Kirby Library, but this book is
wisely unnumbered. It started with The Best of Simon and Kirby

, an overview that included reprints of DC and
Marvel stories; it will continue with separate volumes devoted, respectively,
to their crime, horror and romance comics. For the uninformed, Simon and Kirby invented the romance comics genre.

Neil Gaiman contributed the introductory essay, and it
comes off as a labor of love. I can relate to that. Joe Simon and Jack Kirby
gave the American comic book genre its heart and its soul. They brought emotion
and energy to the four-color page, and [[[ The
Simon and Kirby Superheroes]]] is an educational experience illuminating the
power of the comic book story in its most formative days.

If you’re reading this review, you should be reading The Simon
and Kirby Superheroes. You need to.