Review: ‘I Am Number Four’ 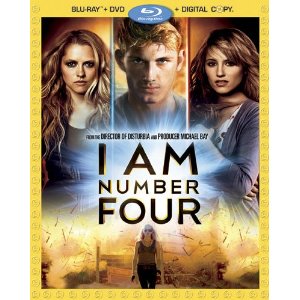 A young boy from another world is raised on in the mid-west to use his special abilities for the good of all. He struggles to fit in at high school, constantly hiding his true nature under the watchful eye of his mentor. After Smallville, one would have thought the writing team of Alfred Gough and Miles Millar would have been comfortable with the subject matter much as Marti Noxon could have used her experiences from Buffy the Vampire Slayer to add some snark and fun to the high school life. Instead, the three combined to pen a middling, ineffective script adaptation of [[[I Am Number Four]]]. The movie, made for just under $60 million earned barely $90 million worldwide and extinguished much hope of a film series to follow the projected six book franchise. Now out from Walt Disney Home Entertainment, the movie is so incredibly devoid of personality and charm, it feels instead that it was constructed by the numbers.

Nine infants were smuggled off the war-torn world of Lorien and brought to Earth to be raised in anonymity by their watchers, er, guardians. Each were descended from a line of powerful inhabitants and born with gifts that would manifest at some time during adolescence. Until they were ready to return and free Lorien from the marauding Mogadorians, they lived apart. A squad (or more, it’s never clear) of Mogadorians are on Earth, hunting the nine. As each one is found and killed, the others are made painfully aware as a tattoo on their legs burns to life. Number Four is a teen living with Henri, who is obsessed with figuring out where the others are and banding them together before more are lost.

Four, or John, refuses to just live in hiding and insists on attending high school, this time in Paradise, Ohio. He tries to fit in but of course, that’s when his special abilities flare to life, and make him a target for the Mogadorians. John falls for Sarah, complicating things, as her ex-boyfriend has it in for the newcomer while the Mogadorians come to town.

The movie repeatedly veers off from the book, written by Pittacus Lore (in reality, James Frey and Jobie Hughes) repeatedly but not necessarily for the better. Characterizations are flat and there’s no real tension being built among the stereotypes in place of the book’s players. And like an episode of Buffy, the pyrotechnic climax takes place in the high school. Lots of important details about the war between the Lorien and the Mogadorians is unclear as is how these nine are supposed to change the outcome from across the stars.

It would have been nice if actually teenagers were hired to play, you know, teenagers but we get instead 20 year old Alex Pettyfer and 25 year old Dianna Agron as Sarah. Both just looked too old for their roles. Agron, a pretty actress, is given precious little to do, including any way of differentiating Sarah from her Glee counterpart, Quinn Fabray.

The greatest sin committed is with the excision of Karen Allen as the mother of Sam Goode (Callan McAuliffe), a geek whose dad disappeared when he sought the aliens years earlier. John befriends Sam, who becomes his confidant and backup as things progress. In the deleted scenes, available only on the Blu-ray disc, director D.J. Caruso explains that her role was added late for the one scene and then deleted because it never paid off. Of course it didn’t, because they shoehorned it in without really layering in the relationship between Sam and mom, who both lost Dad. Her one scene shows what might have been, which was a somewhat richer, more interesting film. The remainder of the deleted scenes was fine.

Both the Blu-ray and standard DVD (available separately or as a combo pack with a digital disc) also come with a 11 minute featurette spotlighting Australian actress Teresa Palmer as Number Six and about three minutes of bloopers.

Given the pedigree of the authors, screenwriters, and DreamWorks as the production entity (meaning Steve Spielberg touched this at some point), one expected more. This was counterbalanced by director Caruso and producer Michael Bay who always choose blowing things up than doing anything interesting.