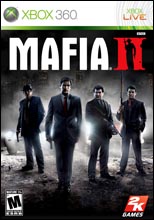 To say that, as people, we’re not fascinated by the underworld lifestyle is a misnomer.  While not all of us revel in the seedier side of the “business” world, we’re always intrigued at how the other side lives.  Be it through books, movies, television shows or yes, even video games, the life of a criminal and their dark undertakings is one that captures the imagination, and if we were less discriminating people, it would be a world we might engage in ourselves — if there were no consequences.  Thankfully, that’s the kind of safety video games offer, and as such, 2K Game’s Mafia II

is one such look into this world…albeit a world gone by as the early days of the Cosa Nostra (or at least, a version of it) is delved into.  Did their gameplay make us an offer we couldn’t refuse?  Hit the jump for the full review.

[[[Mafia II]]] begins innocently enough.  As an immigrant into “Empire Bay” in the early 30s, life for Vito Scaletta wasn’t easy.  His family moves to America in search of a new life, and only finds worse conditions than those they left.  Vito soon falls in with the wrong crowd, and in his teen years gets pinched stealing while his buddy Joe makes a getaway.  Instead of jail time, he’s roped into serving his country during the war.  When he comes home, he finds his family’s life hasn’t been surviving well without him, and his pal Joe has a few ideas on how to make things better.  You can see where this is going.

One of the best remarks I can say about this game is it’s story.  It has all the earmarks of a good gangster tale, full of double crosses, unexpected plot twists, and never-ending redemption for those that have wronged you.  While Vito isn’t the nicest of guys, considering what he does for a living, he’s very family oriented, and while taking out hits or turning over guys for hush money, he’s also helping out ladies with repairing their cars or mashers trying to get feisty.  The game sets it’s time period heavily in the late 40s and early 50s, and the cars (while not real models) emulate the look of the period.  There’s even licensed music straight out of the era, and newscasts on the radio help to drive the fictional story somewhere into reality.

Speaking of the cars, you should get used to seeing them, as you’ll be doing a LOT of driving in the game.  A good 80% chunk of your missions involve driving from one location to the next before you can actually get any “action”.  However, the action itself is no slouch once you get there, and there’s a cool variety of missions to involve yourself in.  From stealing gas stamps to posing as window cleaners to take out a hit, to selling stolen cigarettes, there’s always business to be done in Empire bay.  While the city is set up to appear wide and vast, the game is actually heavily structured and mission based.  Each mission is divided up by chapters, and you complete a chapter (usually) by going to bed once your task is done.  Before this, though, you can entertain yourself with a few tasks such as stealing cars to sell, robbing stores, or actually just shopping for new threads.  The game is actually structured so that, yes, you have the freedom to do SOME things, but it wants you to focus on the story itself…and that’s not such a bad thing for a supposed “Sandbox” game to have.  Too often i find myself wandering too much away from the story and wreaking havoc; here I was entertained to the end, and wanted to see the story continue. 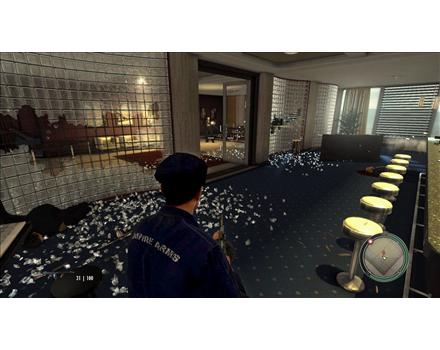 Combat itself is fairly user-friendly.  Aiming is a breeze and the variety of weapons Vito can use are lethal and satisfying.  You can also take down goons with your bare fists, but usually you’ll only want to try that on unarmed foes.  While the gunplay and melee aren’t anything new, they do a serviceable job of moving the action forward.  The graphics themselves are slick and evocative of the time period, but occasionally there’s some hiccups in the handling of cars, or pop-up in the background when driving through areas.  Nothing major that I noticed on my playthrough, but I’ve heard reports of worse.  Your mileage may vary.  As with all games of this type, there’s also a variety of collectibles to gain throughout the missions.  As you complete them you can unlock posters and concept art…you can even pick up issues of Playboy from the era to peruse the…ahem…articles.

All in all, Mafia II has an engaging storyline, fantastic soundtrack, exciting set pieces and action to spare.  There’s even downloadable content that adds to the action.  So far Playstation owners got the exclusive  DLC, “The Betrayal of Jimmy”included with the game when it was released.  Since then “Jimmy Vendetta” has been released for both Xbox 360 and PS3, which offers a score based set of missions as extra challenge, and “Joe’s Adventure”, focusing on Vito’s partner-in-crime, will be released in the coming weeks.  With so much to do, see, and collect, as well as expansions on the gameplay, it’s easy to see where this falls on the BUY IT/RENT IT/SKIP IT scale: