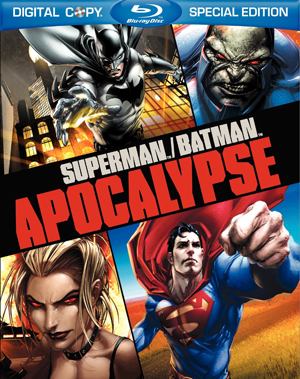 While the various animated series featuring the DC Universe heroes have had a loose connectivity, the feature films from Warner Premiere have been fiercely independent with variations in look, vocal cast and attitude. That is, until now. In Superman/Batman: Apocalypse

, out today from Warner Home Entertainment, we have the first animated feature to immediately pick up on the events of a previous offering, in this case Superman/Batman: Public Enemies. Of course, it makes sense since they both are drawn from the Superman/Batman ongoing series and comprise the title’s first two story arcs.

The arc, from Jeph Loeb and the late Michael Turner, introduced Supergirl to New Earth. In [[[Public Enemies]]], President Luthor tried to blame a large kryptonite asteroid en route to Earth on Superman. After the World’s Finest team destroyed the threat and exposed Luthor’s criminal activity, all seemed safe. As the new feature opens, a voiceover recaps those events and sets up a chunk of the shattered rock splashing into Gotham Bay. As [[[Batman]]] investigates, he encounters a naked, confused teen girl who is speaking gibberish. Demonstrating super-powers, she is confused and causing havoc, requiring intervention from the Man of Steel, who comes to realize this is his cousin Kara Zor-El.

The personality differences between the Dark Knight and the Metropolis Marvel have never been better portrayed in a story, which was adapted for the film by Tab Murphy. Batman’s suspicious and cautious while Superman is delighted to find a blood relative after all these years of emotional isolation. How they react to her arrival informs their actions for the remainder of the story. Also, Murphy does a nice job of delineating a teen who has lost her parents and home, finding herself a stranger in a very strange land. She’s young and innocent, striving to find an identity and rebelling when the adults try to dictate her future without consulting her. 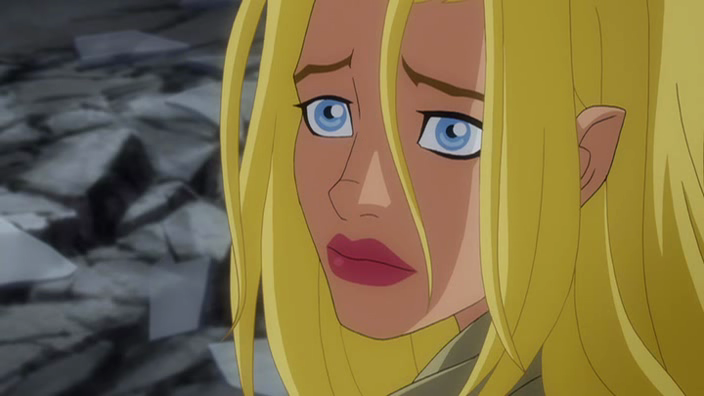 And here’s where Murphy should have ignored the comic for a more logical
story point. As the heroes debate, Kara is suddenly nabbed by a group
of Amazons led by [[[Wonder Woman]]] who, after a battle, declares she must come to Themyscira for training. Given the relationship between the DC Trinity, it would have made more sense for her to arrive with her concept and see what happens.

The sequences on the island are too brief and the depth of friendship between Kara and Lyla is sketchy at best, telling us more than showing us why they bond so quickly. As it is Lyla is barely identified so casual viewers probably think she’s an Amazon not something more.

A similar complaint is that when the
Female Furies come for Kara, and then battle the heroes, which nicely
include Big Barda, their former leader, they are no really identified or
given much in the way of personality.

The major conflict here
is the battle between Superman and Darkseid for control of Kara’s
destiny. Darkseid hungers for someone to lead his Furies in his quest
for galactic domination and sees Kara as the perfect candidate. His
dealings with Superman and Batman are well handled on Apokolips.

Just
when the movie feels like it is ending, there’s a climactic battle with
the unleashed rage of Darkseid against the World’s Greatest Super-hero
in Smallville that is visually different than the comic but also one of
the better animated battles in the film series.Overall, this is a solid adaptation and worthy of your attention. The
visual designs are inspired by Turner but are too bland for my taste.
The characters initially created by Jack Kirby lack that Kirby cosmic
look and feel which is a shame but the strong vocal cast, led by Tim
Daly, Kevin Conroy and Andre Braugher more than makes up for it. Summer
Glau is an excellent choice for Kara, with some teen angst and strong
emotional core coming through.

The various editions of this release also include the third DC Showcase
short, this time featuring Green Arrow. The weakest of the bunch, it was
written by Greg Weisman who has been hankering for years to tell the
story of the Emerald Archer marrying Black Canary. Here, the hero is
overly reactive and devoid of personality. The too much action and not
enough plot tale is hurt by storytelling logic flaws and so-so character
designs.

Special features on the Blu-ray edition include four strong episodes of
the television series focusing on Supergirl and Apokolips.  There’s a
very nicely done “[[[The Fourth World: The New Gods]]]” with Dan DiDio, Paul
Levitz, Walter Simonson, Bruce Timm, and ComicMix’s own Alan
Kistler discussing the impact Kirby’s pantheon had on readers and the DC
Universe. There are “pods’ spotlight the characters of Orion and Mister
Miracle which is odd considering neither are in the feature film. The
disc is rounded out with “[[[Supergirl: The Last Daughter of Krypton]]]” which
was culled from the seventh season [[[Smallville]]] DVD collection and needed some updating.