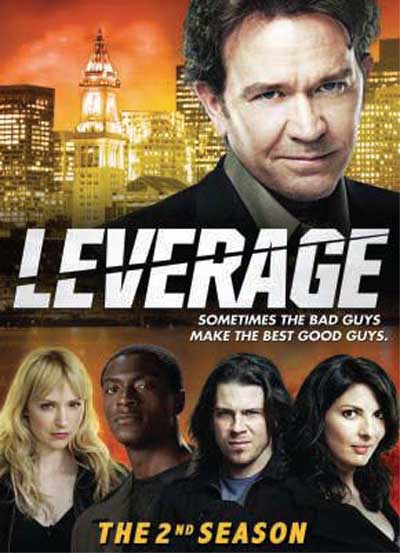 Cable dramatic series take chances on shoestring budgets, casting a few familiar names and plenty of unknowns, shooting in unfamiliar locales and yet, have continually been delivering the goods, making the quality of television overall much better than it has been in a long time.

Among the more inventive, engaging and entertaining of these shows is TNT’s Leverage

, which returns for a third season with a two-episode debut on June 20. This week, Paramount Home Video releases the complete second season

in a four-disc DVD set. By now, most might be familiar with the high concept: a band of thieves teams with an emotionally damaged insurance adjuster to apply the right amount of “[[[leverage]]]” to do good.

The show has evolved into more than just the caper of the week as this band of dysfunctional people grows as individuals and as an odd family. In the center is Nate Ford (Timothy Hutton), who lost his son because his own insurance company declined to cover a potentially life-saving treatment. This has cost him his job and his wife, sending him into an alcoholic binge. For the first 27 episodes, Ford continues to insist that bending and breaking the law to accomplish justice makes him a good guy, not a thief. That all changes as his character arc reaches a crisis point in the 28th show.

His emotional damage is such that he has not been able to maintain real relationships with people including Sophie Devereaux (Gina Bellman), the grifter he’s harbored feelings for over the years. Season two was broken into halves and by the end of the summer 2009 half, she left the team to find herself (a clever way of writing her out to cover Bellman’s pregnancy). To protect the team, she has asked her friend Tara Cole (Jeri Ryan) to take her place so injecting her into the family brings up trust issues. Throughout the winter 2010 half season, members of the team are seen seeking advice from Sophie as she globetrots and is seen on viewscreens only.

The entire second season builds up to breaking Ford down, as he falls off the wagon in Sophie’s absence and is gradually distancing himself from the team. The fifteen episodes comprising the complete second season have somewhat slight cons while carrying forward many of the character arcs, enriching the overall series.

Several figures from season one return, among them James Sterling (Mark A. Sheppard), Nate’s former rival and now opponent. The Sterling-Ford confrontations are well played by two gifted actors and keeps reminding us of Ford’s tortured past. The return of his ex-wife Maggie Collins (Kari Matchett) also complicates matters as does Nate’s decision to relocate to Boston and live above the Pub where his father used to do business and drink heavily.

The show is uneven to be sure, as the supporting cast is nowhere near as well-developed as they should be. Parker (Beth Riesgraf)’s background is the most intriguing but little is done to show us more and the potential romance with her and Alec Hardison (Aldis Hodge) has gone nowhere. Eliot Spencer (Christian Kane), the deadliest muscle on Earth, has been given too few opportunities to show he’s anything more. Ryan’s character mixed in well and was intriguing but no effort was made to explore how she became a grifter.

The final two-part episode nicely brings things to a climax, resolving some things, and leaving you wondering what will happen next.

The discs contain some nice extras including production crew commentaries on all fifteen episodes, which provide tremendous insight into how much thought goes into setting up arcs and motifs. There’s a Creators of Leverage Q&A from a public appearance, John Rogers Set Tour, a featurette on the special effects, an unevenly funny “The Hand Job” spoof video, a short piece on Any Lange’s music seen in one episode; and finally, the Season 2 Wrap Party Gag Reel.

A nice package and great way to catch up before the ten new episodes arrive to brighten the summer.