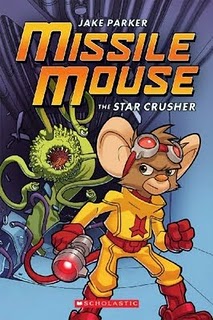 Introduced in the [[[Flight]]] anthology, M[[[Missile Mouse]]] is the plucky secret agent for the Galactic Security Agency, described as a “risk taker and a rule breaker”. Clad in his yellow and red flight suit, he performs missions that seem to earn him a broad reputation across the galaxy, which is odd considering he’s well, a secret agent.

Jake Parker, an animator for Blue Sky Studios, takes his resident rodent and produces his first graphic novel, [[[The Star Crusher]]], already billed as a series with a second volume due in January 2011. The question, though, is what is new and different here? Plucky, rule-breaking solo adventurer? Seen it before. In hot water with his blustery boss? Ditto. Thwarted time and again by his arch rival? Yep.

The brisk read pretty much is comfortable junk food, quickly consumed and easily forgotten. What is new – some of the science behind the MacGuffin — is not enough nor are the flashbacks which attempt to show us why Missile Mouse is the risk taker he is.

Instead, we get an anthropomorphized spaceworthy Indiana Jones or Buck Rogers adventure with not enough fresh thinking to the characters, story or storytelling to be worth the time and effort. For example, we’re told there’s a hidden asset at work for the villain but by then, it’s clear who it is given the small number of characters introduced so there’s zero suspense.

Parker’s storytelling is fine as are his character designs and use of color, which makes sense given his background. What he needed to do more of, especially given the page count, is show us more of how his universe works, the societal structure and why the need the GSA and why does the GSA need a rogue like Missile Mouse.

His page construction is interesting, with lots of smaller panels per page along with bigger ones, varied enough to be visually arresting. Parker should also have come up with a better cue for readers to know when Missile Mouse was experiencing a flashback. His lettering should be sharper and more distinct for a science fiction strip, paling in comparison with the vibrant use of color.

An inauspicious debut story, Missile Mouse is certainly not mighty, atomic or marvelous enough to be enduring like his predecessors.