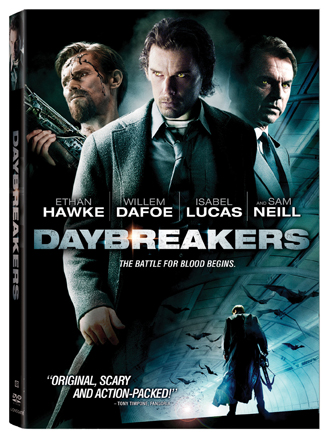 One of the interesting themes rarely explored in vampire movies is the idea that the more vampires you create, the more demand there is on the human blood supply. That changed earlier this year with Michael and Peter Spierig’s Daybreakers

. The movie opened in January and explored an America that saw human beings on the brink of extinction while the ruling vampire majority was on the brink of rioting as the blood began getting rationed. Lionsgate released the film on DVD earlier this month.

We’re told some medical pandemic turned mankind into vampires but the rules of vampirism are barely sketched out causing confusion. We do know that blood deprivation begins mutating the vampires from humans with fans to “subsiders”, something more like a man-bat hybrid.

On the one hand, you have pharmaceutical company Bromley Marks, led by the cold, calculating Charles Bromley (Sam Neill). Then you have vampire hematologists Edward Dalton (Ethan Hawke) and Chris Caruso (Vince Colosimo) working on the desperately-needed blood substitute. Until then, they continue to milk captured humans, attached to rigs to steadily drain the blood and keeping them barely alive.

On the other hand, you have the remaining humans working for survival as exemplified by Audrey (Claudia Karvan) and Elvis (Willem Dafoe), who has somehow been cured of the disease. Audrey reaches out to Edward to enlist his support in working on a massive cure to save vampires and humans alike. Of course, not everyone endorses this sort of cooperation.

Much of the dramatic tension is seen through the relationship between Edward and his soldier brother vampire Frankie (Michael Dorman). While Edward is trying to help, all Frankie has it a hatred for humans and close-minded attitude despite the growing crisis.

The movie’s strength is in how society has changed and yet remained startlingly familiar as humans ceded society to the vampires. People still buy their blood-laced coffee, board the subway and go to work in their suits. Cars can switch to daylight mode, sealing off the windows with three video monitors showing the traffic and geography outside.

What is missing from the worldbuilding is any sense of what the rest of the world is experiencing and how other countries are handling the panic. No geopoltiics are raised at all which is odd considering the Australian pedigree of the production crew.

While the society is interesting, the characters are flat, dour, humorless people. The film has one tone and never varies so you have no highs and lows. You feel nothing for any of them, human or vampire, because the writing gives them no dimension. As forces move towards one another, stemming public riots or undermining the humans’ efforts to cure the disease, you see a lot of sound and fury and fangs and blood and you feel nothing. The all-too-obvious tension between brothers and romance between Edward and Audrey fails to engage the viewer. Worse, the horror things Charles inflicts on his daughter Alison should be an emotional highlight but is dull and uninteresting.

The movie is supplemented with 1:24 Making of… feature showing the development of the project from the 2004 script to the 2007 production. Some of the best parts are showing us the work from New Zealand’s Weta Workshop, which created the creature effects. Interestingly, the film sat on the shelf until it began screening around the world in 2009, ending with the American release. You also get a Poster Art Gallery, trailer and nothing else.