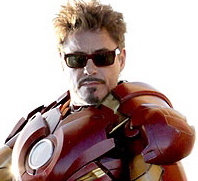 Tony Stark isn’t just a cool exec with a heart of steel. He’s also the technological hero called Iron Man. And with Iron Man 2 coming out this Friday, we’re sure to see new suits of armor with cool improvements. Over the years, Tony has constantly redesigned and updated his armor. There’s been stealth armor, undersea armor, space armor, briefcase armor, armor that has horned face plates, armor with extended shoulder pads, etc., etc.

But some changes are not all they’re cracked up to be and perhaps should’ve been left on the drawing board. So let’s take a look at some of the silliest upgrades Iron Man has made to his famous armor. 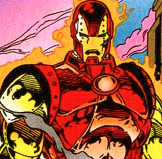 Oh, look. Tony’s gone temporarily evil/insane due to time traveling villains messing with his mind. Of course, the Avengers are none the wiser. It’s not like you can SEE Tony’s evil cuz he suddenly has a beard or something like th– wait, what’s that? Tony added sinister rivets to his face plate that serve no purpose? 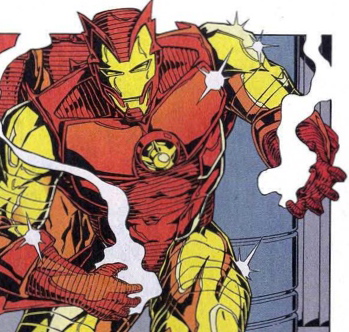 In the same storyline where Tony went evil, we met a younger version of him from a parallel universe. This “Teen Tony” had to quickly make up his own suit of armor. How to describe it? Spikey. Spikes on the shoulders. Spikes on the gloves. Spikes on the helmet. Their purpose? Um … to look cool? I mean, it’s the 90s. Spikes mean you’re cool, right?

And what’s with the new helmet? Not only do you have weird clown laugh lines leading to the mouth, but the spiked design tells me that Tony secretly wishes he had Bart Simpson’s haircut.

Further proof of why the Teen Tony storyline sucked and should never be referenced in today’s comics. 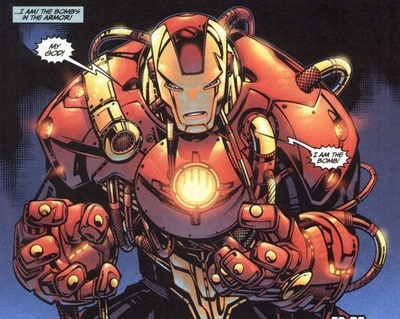 Askew Electronics, along with some help from Tony, developed a versatile liquid metal called synth-kinetic interfacing nano-fluid or “S.K.I.N.” He used this component as part of his new suits of armor. Unfortunately, the proto-model SKIN armor looked like Tony cobbled it out of a junkyard. Honestly, it looks like spare parts from Battlebots. 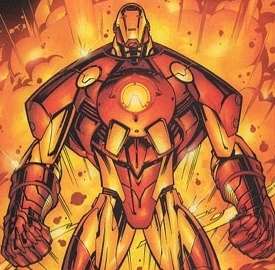 Of course, Tony upgraded the armor not too long after that. Which should’ve been great! Except that this subsequent upgrade made him look … well, um … heavy? Is “heavy” the right word? I mean, Tony went from looking like an armored hero to resembling a robot that had been modeled after a linebacker.

Just take a gander at this picture and marvel at his ridiculous chest and shoulders. Don’t you want him to play football with Thor and the Hulk now? IMAGINE that game!

And speaking of shoulders … 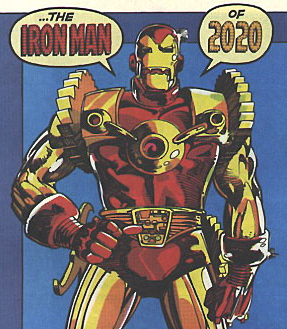 Okay, technically this isn’t Tony wearing the armor. It’s Arno Stark, Tony’s evil nephew who lived in a possible version of the year 2020 (back when that seemed to be a lot further in the future than it does now). Arno Stark was a mercenary who inherited Tony’s armor and did very bad things with it, including going back in time to cause trouble for the modern-day heroes.

And you can tell he’s evil, right? I mean, look at those buzzsaw-like shoulders! And the blades at his hips! AND of course, the most sinister feature of all, meaningless teeth on his helmet! OOOOH! Who wouldn’t be threatened by teeth that don’t actually operate and are just there for decoration? 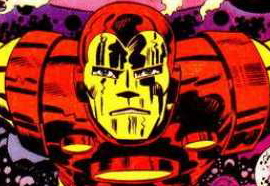 According to writer Roy Thomas, Stan Lee had been concerned that artists were drawing Iron Man’s faceplate too flat, not leaving enough room to indicate his face could actually fit underneath. When he asked “Shouldn’t Iron Man have a nose?”, the Marvel staff apparently decided to take him literally and gave the golden Avenger a nose port on his face plate.

After a few issues though, people realized it just looked silly and it went away. Thank god. I don’t know why, but while the nose thing works for Dr. Doom, it most certainly does not work for Iron Man.

Roller skates on your boots? When you can just walk or fly? And sometimes using mini-rockets so you can skate even faster down hallways? Really?? 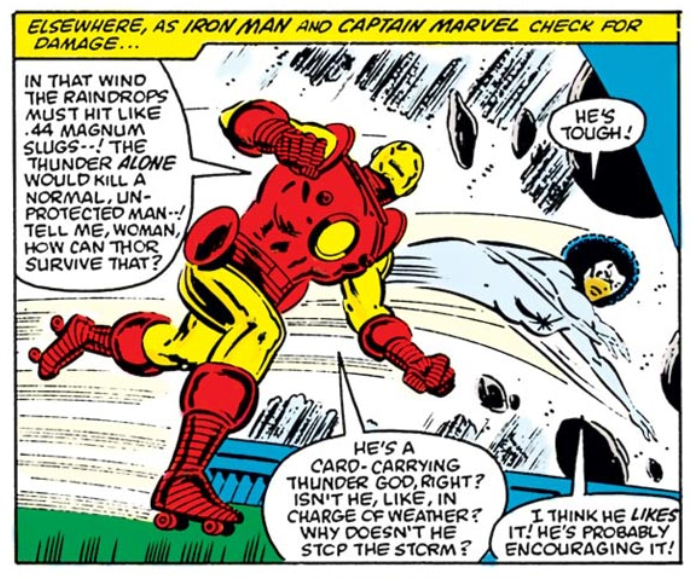 Okay, Tony. Admit it. You went and saw the movie “Whip It” and you got a crush on Drew Barrymore and Juliette Lewis so you wanted to impress them with your own skating skills. It’s cool, man. It happened to many of us. Derby girls are hot. Just admit it and let’s move on.

That’s it for now! Be sure to check out our other ComicMix Six lists!

Alan Kistler once wore Iron Man’s briefcase armor and it was awesome. Okay, it wasn’t exactly briefcase armor so much as a briefcase that fit him.  Alan has been recognized by Warner Bros. Pictures and mainstream media outlets as a comic book historian is the creator/host of Crazy Sexy Geeks: The Series. His personal website can be found at: KistlerUniverse.com.