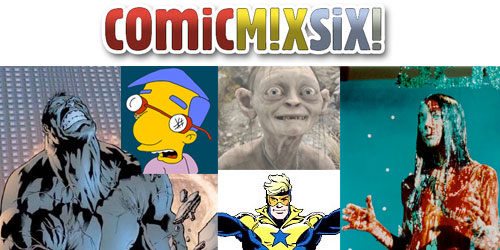 Valentine’s Day can be a lovely little holiday, can’t it? You and your sweetie exchange little trinkets of love… romantic candle lit dinners… kanoodling on the futon while you watch DVR’ed episodes of Doctor Who… you know, all that gushy stuff. But we know for some out there, the day is just another in a long line of ‘Hallmark Holidays’ meant to sap money out of fools in love. And if you don’t have a Valentine (your Mother only counts if you’re still in grade school…) well, Comicmix wants you to know you’re not alone. Here’s a few folks who think “One is the lonliest”, but deal with it anyways:

1.Ultimate Hulk – The Grey/Green (depends on the “Season” we suppose) Goliath may have have the hots for Betty… But then he started eating people, which assume was a big turn off for her. And sure, he may have a rockin’ set of abs, and can tear a tank up like tissue paper… But he’s also got serious anger management issues. He also once scaled a building yelling for Freddie Prince Jr.’s head on a platter, whilst naked. Not what we’d call a Don Juan in the least.*

2. Booster Gold – We know what you’re thinking… Cool futuristic suit. Flight. A shiny gold flying iPad 4.0 for a best friend… What’s there not to like? He’s got to be batting off the ladies with a bat! But, sadly, the DCU’s newest ‘Time Master’ is also it’s newest loner. Having to help defend the DCU’s time stream can really put a damper on a dude’s love life. And when he’s not getting pants by the Joker on a recursive loop, Booster’s biggest mission seems to be finding new ways to piss off Rip Hunter, not pitching woo to Fire.

3. Smeágol / Gollum – Middle Earth has it’s fair share of uggos, crazies, and weird dudes… But no one takes the “loner” monicker to new depths like this former Stoor-Hobbit. And hey, we admit that we sometimes have an odd ‘fondness’ for an inanimate object (we’re looking at you, fantastic replica Alan Scott Power Battery with replica ring…), but Gollum takes it to a whole new creepy level. Sorry buddy, when you’d rather leap into an active volcano to be with your ‘Valentine’ than try a round of Speed Dating at the Prancing Pony… you’re taking the term ‘dedicated bachelor’ to a new low.

4. Silver Surfer – We’re free of snark on this one folks. Norrin
Radd made the ultimate sacrifice for the love of his life, as well as
his home-world. Rather than see Shalla-Bal and Zenn-La turned into a
blue-plate special, Radd sacrificed his life to take the universe’s most
thankless and lonely role. As the herald of Galactus, Radd became the
Silver Surfer, forced into a life where he’d never see his wife
again… making him a galactic symbol of solitude.

5. Milhouse –
“My feet are wet, but my ankles are bone dry! Everything’s coming up
Milhouse!” Well, you may be Bart’s best pal now… but we’ve seen the
future poindexter. You may muscle up a bit in high school after Lisa
dumps you (you barely got to first base)… But you end up alone, bald,
and managing Homer at the Power Plant. D’oh!

6. Carrie White –
Sorry ladies, this list isn’t just for the male freaks and geeks. Sure,
Carrie is a sympathetic girl. She’s got the ‘Woman’s Curse” and “Dirty
Pillows” on her chest. Her mom’s even sure Jesus doesn’t even love her.
And well, if she cleaned herself up a bit, and maybe kept the
telekinesis to a minimum she might be a fun date. But, one little
prank, and the next thing you know she’s burning down the school, and
hurling knives and fire everywhere. That’s no way to get the attention
of the captain of the football team, dear.

* And yes,
we did read Damon Lindelof’s Ultimate Hulk vs. Wolverine where he did
in fact hook up with Betty, now the “Ultimate She-Hulk”… But we doubt
they’re the next Brangelina of the Marvel U.