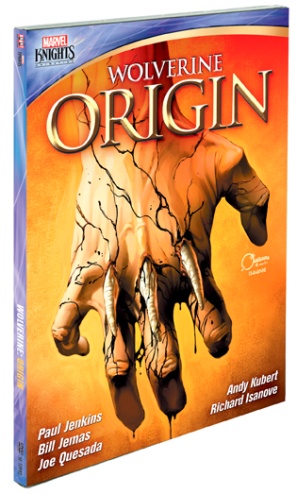 Shout! Factory is releasing the next Marvel Motion Comic, this one the adaptation of the acclaimed Wolverine: Origin miniseries. Here are the formal details:

This summer, Marvel fans will learn the secret history of WOLVERINE that changed the Marvel Universe forever! Written by Eisner Award winner Paul Jenkins from a story by Joe Quesada, Paul Jenkins and Bill Jemas with captivating artwork by Andy Kubert and Richard Isanove. The adventures of Wolverine’s early days and the startling revelation of his true origins are brought to life when MARVEL KNIGHTS ANIMATION’S WOLVERINE: ORIGIN debuts for the first time on home entertainment shelves nationwide on July 9, 2013 from Shout! Factory. This highly anticipated Marvel Knights Animation presentation boasts engaging storytelling combined with visual rich animation and insightful bonus content. Featuring cover art illustration by Joe Quesada and Richard Isanove, this deluxe DVD is collected in a unique comic book style packaging that bridges the comic book to DVD concept. As one of the most important stories of all time in the Marvel Universe, this DVD is a must have for loyal fans, comic book enthusiasts and collectors. MARVEL KNIGHTS ANIMATION’S WOLVERINE: ORIGIN is priced to own at $14.97.

Exclusive behind-the-scenes bonus content features interviews with the creators and illustrators to provide an intimate and retrospective look at the development and production process of this amazing story. Marvel Knights Animation remains true to the heritage of panel-by-panel graphic storytelling, boasting groundbreaking illustrations, sensational soundscapes, and of course, the explosiveness of the Mighty Marvel Universe. Behind every image and every word lies the genius of Marvel’s celebrated creators.

Wolverine is the best there is at what he does – although of course, what he does isn’t very nice. But long before he was a member of the X-Men, a tormented experiment of the Weapon-X project, or even a savage bar brawler known as Logan – he was simply a young boy.

What incredible forces created this man, the world’s greatest killing machine? For years, Wolverine has searched desperately for answers from his past, from the wilds of the Canadian Wilderness to the teeming cities of Japan and beyond. And despite his perseverance and longing for the truth, he remains an enigma to himself and those around him. But, in this landmark event, Marvel reveals all: the birth and childhood of young James Howlett…the intriguing secrets of his family history…and the tragedy that changed everything.

An exclusive retrospective with the Eisner Award-Winning creative team behind Origin.