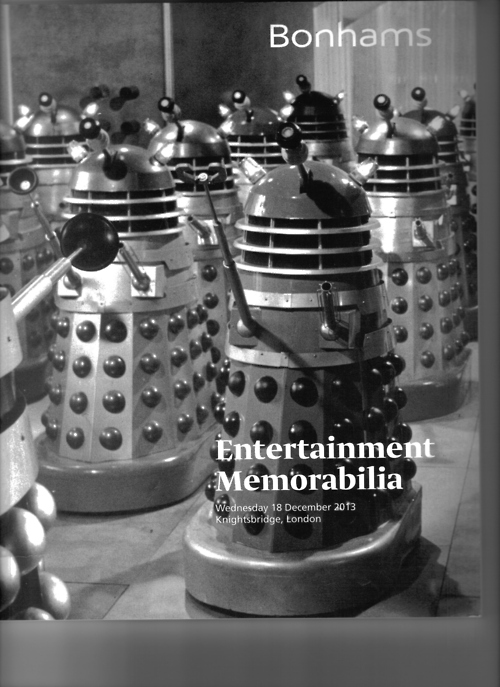 Auction house Bonhams is hosting an amazing number of collectibles in their latest Entertainment memorabilia auction.  But it’s the genre items likely of more interest to our readers, including costumes and props from Torchwood, Doctor Who, and the James Bond film series.

Music lots up for auction include a wide range of autographed items from The Beatles, Rolling Stones and The Who, as well as more contemporary performers like Amy Winehouse.  There’s an assortment of movie posters from as far back as the silent era and a small assortment of autographs, including Christopher Reeve.

When the selection of James Bond memorabilia begins, things get very interesting.  Scriptwriter Jack Whittingham was tasked to write the first James Bond script, years before the series began with Dr. No.  Ian Fleming and partner Kevin McClory planned to produce the film, but their professional relationship dissolved, and Fleming took much of the details of that unused script and turned it into the novel Thunderball. He chose not to credit Whittingham or McClory, an error that came back to bite him, especially when the film based on the novel came round. After a protracted court battle, Whittingham and McClory got “Based on” writer credit on the novel, and McClory got a producer credit on the film, as well as film rights to everything in the script, including the evil organization SPECTRE.  Whittingham has put up for auction a memo from Fleming about the project, a copy of the original treatment, and a first draft of the film script, at the time called Longitude 78 West.  Additional Bond-related items include an original sign from Pinewood Studios and an assortment of posters and ephemera.

The Doctor Who and Torchwood collection includes an assortment of costumes from the series’ runs, including a number of Captain Jack Harnkess’ signature RAF great coats.   The Doctor Who props go back as far as the Troughton era, namely scripts from The Abominable Snowmen and Web of Fear, as well as two of the Yeti “homing device” props.  Costumes and props from the Baker era on up are featured, including Cyberman costumes from Silver Nemesis, a destroyed Dalek, and an assortment of original art from various Annuals and comics.

The auction takes place on December 18th in London – details at Bonhams.com