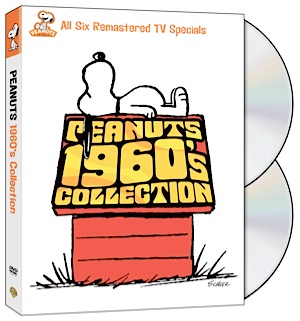 I’ll be honest and tell you that I am in the minority who felt that [[[Peanuts]]] stopped being funny after 1972 and should have been retired long before Charles M. Schulz’s death. All its charm and whimsy had been drained out of it as witnessed by the 1970s material that has been reprinted since his passing. The world had changed and their innocent worldview ceased to feel at all relevant.  But once Schulz found his characters and voice, the strip was brilliant for quite some time.

By 1965, Charles Schulz’s Peanuts had grown to become one of the most popular comic strips launched since the end of World War II if not the 20th Century. It made perfect sense that the characters would eventually find their way onto television. They were first licensed for use as pitchmen for Ford in 1961 and appeared in black and white commercials animated by Bill Meléndez. When Lee Mendelson tried to make a documentary on Schulz in 1963, he hired Meléndez to create a short segment while hiring Vince Guaraldi for the score. The proposed show never sold but sowed the seeds for what came soon after.

As we know today, that first holiday special, was something unique and heartwarming from Guaraldi’s amazing score to the characters being funny and poignant.  While the holiday-themed specials have become television perennials, several of the others have not achieved the same attention.

That oversight is rectified in the Peanuts 1960’s Collection

The Christmas and Halloween specials continue to work well because they
approach each event in fresh ways. The characters are true to their
comic strip personas and the voice casting was superb. Interestingly,
CBS wasn’t so certain the show was any good, fighting with the producer
over the lack of a laugh track and concerned that Linus’ recitation of
Jesus’ birth might be offensive. When the critics raved and the
December 9, 1965 broadcast achieved a 50% rating, the complaints
stopped. As a result, some 30 specials and four animated feature films
were created, all trying to recapture the charm of the original source
material.

The results, as seen here, are uneven. [[[All-Stars]]]
was all about the team’s lack of success at baseball and felt
lightweight with an ending too similar to the Christmas special and [[[He’s Your Dog]]] tried too hard to make Snoopy to be the bad guy when he was being true to himself. The best of the bunch is [[[Short Summer]]] since
everyone gets something to do and the narrative structure allowed
differing points of view to keep the story interesting.  All six are
accompanied by Guaraldi’s jazz scores which helped separate the
animated fare from all other shows at the time, both live-action and
animated. It perfectly fit the characters and stories.

The six
cartoons are all that was produced in the half decade, but captured the
characters at their best, before Snoopy totally eclipsed his owner and
the arrival of Woodstock who helped shift the focus away from the kids
for far-too long stretches. These six capture the end of an era.

The
restoration of the six specials is pretty clean although far from
perfect. The edits that removed the Coca-Cola sponsorship from the
Christmas special remains missing which is a shame from a historic
perspective.

While previous sets, including last year’s edition, contained the wonderful “A Christmas Miracle: The Making of A Charlie Brown Christmas“,
this set only has one extra: a thoughtful and living tribute, “Vince
Guaraldi: The Maestro of Menlo Park”. It’s a great profile but the
other featurettes from other editions could have made this the must
have version of the cartoons to own.