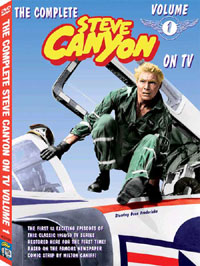 When Milton Caniff broke away from [[[Terry and the Pirates]]] to create (and own) [[[Steve Canyon]]], he began an odyssey that lasted from January 13, 1947 until his death and the strip faded with him on June 4, 1988. Along the way, he populated the strip with friends, family and enemies, bringing a serialized melodrama to the newspapers while also supporting the armed forces.  Canyon was an ex-WW II pilot who re-enlisted when America entered the Korean conflict. He never left the service from that point, which allowed Caniff to send our hero around the world multiple times.

While the strip was popular with readers, and respected by fellow cartoonists, it didn’t spawn the usual assortment of merchandise.  Few today recall there was even a short-lived television series that aired on NBC from 1958-1959.  In all, there were 34 episodes which began with Canyon as a traveling nomad until halfway through the season when he became commanding officer at Big Thunder Air Force Base. At $48,000 per episode, it was the most expensive show from the three networks and its middling ratings didn’t justify renewal.  After rerunning on ABC in 1960, it vanished.

Fans of Caniff have worked with the estate to lovingly restore the series and has begun releasing the series on DVD.  Three volumes, collecting all 34 episodes, are expected with the first being released a few weeks back.

Dean Fredericks stars as Canyon and resembles his print counterpart, playing the role with a deadpan, serious demeanor.  As happened in the 1950s, our television stars are flawless role models who always know best.  None of the rich supporting cast made it to the series, which left the show all the poorer.  In fact, the show seriously lacked supporting characters to play off Canyon which also made the show feel thin. 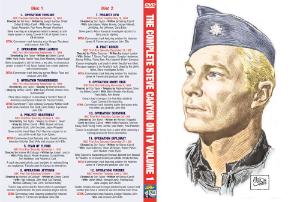 The first two episodes are almost identical in plot and variety doesn’t creep in until later. In most cases, Canyon is assigned to visit an air force base to check out a problem be it person or plane. In just about every visit, he knows someone so there’s a connection. The plots are varied as you work your way through the dozen episodes. Plenty of declassified jet footage makes the show feel authentic.

Interestingly,  “Fear of Flying” shows the toll a pilot’s life can take on his family as in one scene the wife lists all the expenses that have to be covered.  “Project UFO” takes a jaded look at the craze, as Canyon uncovers unsavory people exploiting the sightings without acknowledging Project Blue Bok or the possibility extraterrestrial life exists.  The Middle Eastern problem is the setting for “Operation Diplomat” with politics boiled down for simplicity and the Pakistanis appearing as costumed bad guys who are scared by a flare.

Given that a few of the episodes show experimental aircraft at anything less than perfect (where else would the drama come from?), apparently the Air Force and aircraft manufacturers registered their complaints.

The guest cast is filled with familiar faces such as DeForest Kelley, Marion Ross, Morgan Woodward, and Dana Elcar.

The episodes are supplemented by the original advertising for Chesterfield cigarettes, L&M cigarettes, game shows and other prime time and syndicated series. 10 of the 12 episodes come with commentary that can only be accessed through your remote, not a separate screen option.  On a laptop, this is extremely difficult to find.  The commentary, though comes from many of the actors who appeared on the series along with aviation historian John Kitka and DVD producer John Ellis.