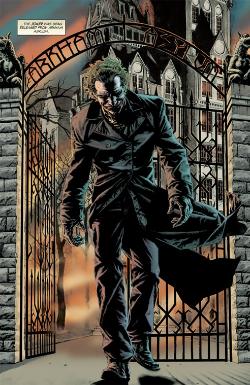 On October 22, DC will be releasing the hardcover graphic novel Joker

(originally titled [[[Joker: The Dark Knight]]]), presented to you by writer Brian Azzarello and artist Lee Bermejo. This is the same creative team who were behind the mini-series [[[Lex Luthor: Man of Steel]]], which explored the mind-set of the Metropolis multi-millionaire and touched on his justifications for why he sees himself as the necessary anti-thesis to the Last Son of Krypton.

[[[Joker]]] is a story of roughly the same note, though not narrated by the villain as Lex Luthor: Man of Steel was. In this hardcover graphic novel, the story is narrated by Jonny Frost, a two-bit hood. In an interview with Newsarama, Azzarello said that the reason for this was because the Joker’s narration couldn’t be trusted, given that he was insane, and so it was important to see it from the point of view of someone close to him.

As the tale begins, the Joker has been in Arkham for some time now and has only just now been released, legally and by the book (though how is never explained). This book plays the Joker as a gangster rather than a mass murdering psycho constantly trying to prove there is no point to life. As such, one of the major plot elements is that the Joker had several criminal operations going on when he went in and now he’s found that they have been taken over by others. To regain his criminal power and his money, the Joker begins hunting down the Gotham mobsters who have dared to dip into his operations, telling them, “I want what’s mine back.”

To help him on this quest, he grabs Killer Croc and Harley Quinn (who seems to be a mute in this story), as well as new assistant Jonny Frost, our narrator, a small-timer who admires the Joker and wants to be just like him. As the story goes on, the Joker directly challenges Two-Face, who has taken control of Gotham’s underworld while the Clown Prince of Killers has been away. And with each passing day, Jonny Frost realizes that the Joker is not a person to admire at all.

Not a bad idea. How was the execution?

To be honest, I found it rather lackluster. It was a bit strange at first when I saw that this couldn’t fit into continuity. I didn’t realize this was going to be an Elseworlds. At least, I sincerely hope that was the intention. If it wasn’t, then I’m just confused. All of Gotham’s criminals are re-interpreted into gangsters with a gimmick. The Riddler, for instance, now has orange hair and question marks tattooed on his belly and is apparently a master-thief who mobsters hire when they need something big stolen. Two-Face is not a villain in hiding but a man of legal standing who operates openly out of his mansion and whom the police cannot connect to his criminal operations.

And the Joker keeps calling the Penguin “Abner”, which made me scratch my head since I know the man’s real name is Oswald Cobblepot. Was this supposed to be a joke? If so, I didn’t get it.

Re-interpreting characters for a story that isn’t bound by continuity is not necessarily a bad thing at all. Most recently, Grant Morrison did some wonderful stuff in [[[All-Star Superman]]]. But these particular re-interpretations seem to take away any special flavor the characters had. Killer Croc no longer seems like a super-human menace to be feared but comes off just as a hired thug, wearing gold chains and a nose ring while displaying a personality indistinguishable from stereo-typical ghetto-born muscle seen in various crime movies. Harley ‘s biggest scene is when she puts on a strip show for the Joker’s gang. And not once during the story does she ever speak or seem to have a persona outside of “helpful assistant.” Rather sad considering the most entertaining thing about Harley has always been her non-stop motormouth and bizarre view on reality.

And then there’s the Joker himself. This story is, essentially, a gangster getting some revenge on other gangsters. I’ve seen this done a million times before, both with and without costumed characters. There’s nothing particularly special about this particular version of the classic story. The Joker’s plans on how to get even with Gotham’s gangsters and defeat Two-Face are plausible, yes, but there’s no real style or flair to them, none of the genius manipulations I expect from Batman’s greatest enemy. The Joker here doesn’t kill as part of a grander scheme, he doesn’t try to show that people are corrupt at their heart or prove that the world is chaotic and God cannot possibly exist. Murder is just a means to an end and kind of fun. His crimes in this book are vicious, yes, but nothing about the deaths mark the Joker as different from any other spree killer.

At one point, the Joker decides he needs a place to rest. So he breaks into an old couple’s home, shoots them, and then lies down on the bed without moving the bodies. That’s not really the Joker to me, that’s Carnage from Spider-Man. In my mind, if the Joker is going to break into the home of two old people, he at least would have a little fun with them first. Or he would use their deaths to prove some fundamental point to Jonny Frost. If he cares so little about whom he kills and why, then that makes me care less about his motivations and world-view, which was actually the point of this story.

Jonny Frost says he admires the Joker and wants to be like him but there’s no real exploration of why he thinks this way. How much does he know about the Joker? What kind of person is he to find the man’s behavior admirable? I read the story twice and I’m still not sure.

Finally, there’s the lack of Batman’s presence. I don’t mean he should have been a big star in the story. This is, indeed, a Joker tale. But I felt that his presence should have been felt more throughout the story. The Joker mentions he feels [[[Batman]]] watching him, but otherwise our guy doesn’t show up until Two-Face asks him for help. This is Gotham. As soon as the Joker is out and saying he wants to cause some damage, wouldn’t everyone make sure to first ask “What about Batman?” None of the villains or gangsters in the story seem worried about the Bat and that just feels odd. Also, a major part of the Joker’s villainy is specifically his relationship to Batman. Why was that not touched on more in a story that’s supposed to explain the Joker’s evil? Lex Luthor: Man of Steel had Luthor constantly speak about his relationship to the Man of Tomorrow and why they were opposite ends of the spectrum, so the lack of such character exploration in this tale surprised me.

This is not a terrible story. There are some fun lines and I particularly liked Batman’s snide remark to the Joker during their confrontation at the end. Also, Bermejo’s art is fantastic. There’s a rich, colorful feel to it yet at the same time he captures the gritty, urban spirit of Gotham’s underworld. All of the characters have distinctive looks and their facial expressions are able to convey quite a bit even without dialogue. Excellent work on that part.

However, for a story that carries a price of $19.99, this just didn’t feel worth it. And there was nothing about it that made me think “only the Joker would think of that.” The villain could have been replaced with an entirely new gangster character and there would be no need to change the story at all. And that’s disappointing. Sorry, guys.

Alan “Sizzler” Kistler will shoot anyone who tries to make Terra III a clone or a time-displaced person or an alternative universe “equivalent twin.” He has been recognized by Warner Bros. Pictures and mainstream media outlets such as the New York Daily News as a comic book historian, and can be seen in the “Special Features” sections of the Adventures of Aquaman and Justice League: New Frontier DVDs. His personal website can be found at: http://KistlerUniverse.com. One of these days he’d love to write for DC, Marvel or Doctor Who.