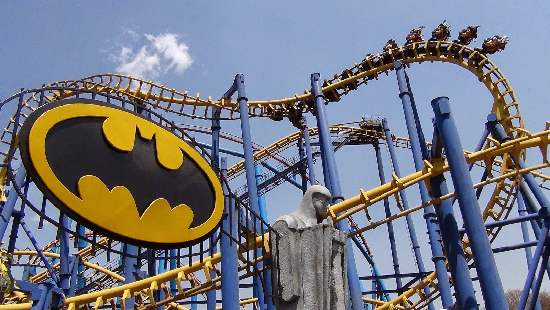 Hold tight – white-knuckles tight, and… up up up upupupupup and… wheeeeeeeeeee! Down we go, and. Slowing, slowing, stopping. Step out now. A bit wobbly, maybe? Excited? Exhilarated? Hey, let’s go get some cotton candy and maybe later we’ll ride the roller coaster again, after we’ve recovered a little. Say, what was the name of that roller coaster, anyway? Well, I’ll be gosh-derned… It’s the Batman roller coaster!

Ah, summertime. And part of the joy of the warm season is a trip or two to the amusement park, and part of the amusement park adventure is riding the roller coaster. When I was a nipper, those coasters were beyond the admission gates of the Forest Park Highlands (though I never thought they were any higher than the city that surrounded them) or Chain of Rocks (which, oddly, was higher than the geography in which it was fixed, but I never saw any rows of rocks thereabouts. Life can be puzzling, especially if you’re a nipper.) I probably rode the coasters in those parks, unless my parents thought I was too young for them, which might have been the case. But Batman? No, never. Roller coasters were in parks and Batman was in comic books and – mark this in your diary – the twain did not meet.

Now, some 65 or so years later, when the world has changed, the conflation of Batman and coaster still seems a trifle peculiar. Coasters are about summer fun, juvenile hi-jinks, laughter and merriment. And Batman? A child watching his mother and father shot, fall to the cold pavement, die. A horror.

What twisted karma could pair childhood delight and childhood terror? You say you’re a Batman fan? Which Batman do you like, the one who lands his name to amusements or the stricken orphan?

While we’re in an inquisitive mood… Are you a Yankees fan? What exactly are you a fan of? The lineup this year isn’t what it was last year nor what it will be next year, and pretty much the same goes for the coaches and business guys and ticket takers.

You’re a Buddhist who believes in reincarnation? Okay, Buddhism holds that nothing is permanent, so what gets reincarnated?

You could ask similar questions about any professional sports team, and a number of superheroes, and maybe another religion or two. And if you did, you might consider finding a nice hobby, or getting out of the house. You might need a little… I don’t really know what you need, any more than I know the answers to the questions I asked a couple-three paragraphs ago. Maybe a little recreation – is that what you need? Hey, know what? I’ll bet there’s an amusement park in your area somewhere.