REVIEW: The Great American Cereal Book: How Breakfast got its Crunch

The Great American Cereal Book: How Breakfast got its Crunch
By Marty Gitlin and Topher Ellis
Abrams Image. Hardcover. 368 pages. $19.95 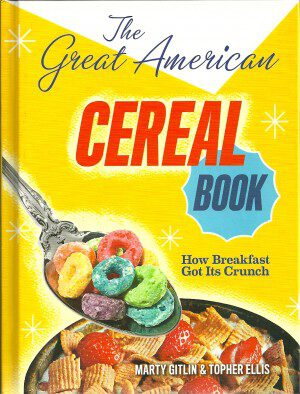 Come breakfast time, my kitchen cabinet holds a limited, and boring, offering of ready-to-eat cereals; just some Kellogg’s Raisin Bran and a box of Honey-Nut Cheerios. In my mid-fifties, breakfast cereal no longer holds any importance in my life. To tell the truth, if I’m going to have cereal, I would much rather sit down with a bowl of Quaker Oatmeal and leave the cold, crunchy stuff for when I’m feeling especially lazy.

But, as The Great American Cereal Book: How Breakfast Got Its Crunch reminds me, once upon a time, in that galaxy far, far away of childhood, breakfast cereal was important. Very important. The Golden Age of comic books, as someone once observed, is eleven years old. That is, whatever it is we’re exposed to as children is what we hold in our memories and imaginations as the best ever of that particular thing. What’s true for comic books is also true for breakfast cereals and, as it turns out, not only do co-author Marty Gitlin and I have a Golden Age of breakfast cereals in common, but that shared mid-1960s era of cereal seriousness came at a time when the breakfast cereal business was in fact booming thanks, in large part, to Saturday morning cartoons.

Ready-to-eat breakfast cereals have been around for over a century, evolving over the years from tasteless, rock-hard biscuits made from baked graham flour and water that had to be soaked overnight in milk in order to be edible, to crunchy flakes, hoops, and clusters sparkling with sugar that challenge the eater to get to the bottom of the bowl before sogginess sets in. The name of the game at the beginning of the ready-to-eat cereals was health and nutrition. John Harvey Kellogg, originally hired to market the Western Health Reform Institute  in Battle Creek, Michigan which he eventually took over and renamed the Battle Creek Institute, advised his patients (which included Henry Ford, Thomas Edison, Amelia Earhardt, and President William Howard Taft) to “eat what the monkey eats–simple food and not too much of it.” 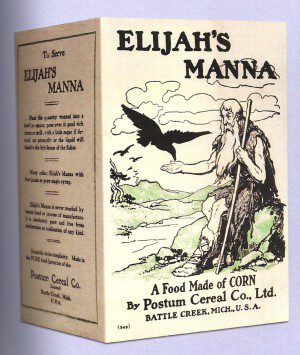 One of the simple foods he pushed was the hard-as-rocks “Granola,” and, in 1896, Granose Flakes, the first flaked breakfast cereal, which came about as the result of an accident when “a pot of boiling wheat” was left overnight on the stove. “The gooey concoction that resulted made for a crispy wheat flake once it was rolled thin and baked.” In 1902, Kellogg had perfected the formula to improve shelf life and flavor; in 1906, the Battle Creek Toasted Corn Flake Company was formed to produce Kellogg’s Corn Flakes. Nor was Kellogg alone in recognizing the potential for breakfast: “By 1902 forty other cereal manufacturers had taken root in Battle Creek, Michigan.”

One of those was C.W. Post, who jumped into the cold cereal market with Grape-Nuts, which “got its name because its inventor…claimed that grape sugar was formed during the baking process and that the cereal had a nutty flavor.” The booklet Post packed into those early boxes of Grape-Nuts touting the cereal’s benefits was called “The Road to Wellville,” a title appropriated by T.C. Boyle for his 1993 novel about the early days of breakfast cereal, which was also made into the 1994 film by director Alan Parker, starring Anthony Hopkins and Matthew Broderick.

The Great American Cereal Book is both a history and exhaustive catalogue of breakfast cereals, from Post’s early Elijah’s Manna (“A Food Made of Corn,” the name of which had to be changed in 1908 “under pressure from religious fundamentalists” to Post Corn Toasties) to such 21st century licensed tie-in fare as The Wild Thornberrys Crunch and Yu-Gi-Oh! Cereal.

Though the creation of Elijah’s Manna/Post Toasties is separated by a century from Wild Thornberrys, they all share a genetic bond; in 1935, Post Toasties was the first breakfast cereal to feature a licensed cartoon character on the front of its box, Mickey Mouse. The first half of the 20th century saw the introduction of eight of the “heavyweights of breakfast cereal history,” according to Gitlin and Topher Ellis (including my own Raisin Bran and Cheerios) but the industry wouldn’t hit its stride until its second half. Mickey and the parade of licensed and company created comic and cartoon characters that followed, naturally targeted kids, and kids were eating them in record numbers in the years after World War II. But only after dumping loads of sugar into the bowl. 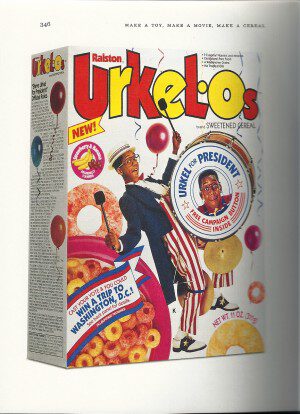 Hard as it is to conceive of now, it was only the belief that cereal was supposed to be healthful that kept presweetened brands off the shelf for so long. Marketing demands gave way to the public good and Ranger Joe Popped Wheat Honnies, Sugar Crisp, Sugar Smacks, Frosted Flakes, and Cocoa Puffs quickly followed. And, with Kellogg’s pioneering lead in what is now commonly known as “product placement” on NBC’s Howdy Doody, the cartoon characters were not only appearing on the box, they were appearing with the characters on network television. Beginning in 1957, Hanna-Barbera’s Yogi Bear and Snagglepuss with downing bowls of OKs and Cocoa Krispies. By the time of Gitling’s Golden Age, the mid-1960s, Saturday mornings were blatant “advertainment,” with the same characters in the cartoons also pitching cereal between animated episodes. Primetime was just as bad as everybody from The Beverly Hillbillies to The Monkees were being brought to you by Kellogg’s et al. The cereal jingles (“K-E-double-L-O-double-Gee, Kellog’s best to you”) were as familiar as the program theme songs.

The FCC banned the practice in 1969, but cereal was not without animated spokesmen of its own.  In 1963 the Quaker Oats Company approached animator Jay Ward, creator of the popular Rocky and Bullwinkle Show to come up with a pitch-character for a hypothetical cereal; Ward fired back with Cap’n Horatio Crunch. The rest is maritime and cereal history.

Like any good cereal box of old, there is plenty that is colorful and bright to catch your attention in The Great American Cereal Book. There are plenty of photos of cereal boxes, cereal ads, and cereal premiums. There are sidebars covering all sorts of cereal trivia, from the story of Cap’n Crunch to a multi-page list of Kellogg’s Corn Flakes imitators. And there are the statistics for what seems like an endless array of crunchy goodness, the perfect read for the breakfast table. Because whatever you’re eating, if it was made by General Mills, Kellogg’s, Nabisco, Nestle, Post, the Quaker Oats Company, or Ralston, and milk’s ever been poured on it, you’re likely to find it in here. Even such classics as 1968’s Riceroos, or 1972-1975’s Teutonic-themed Baron Von Redberry (and his opponent Sir Grapefellow), and 1978-1979’s Crunchy Loggs…and let’s not forget 1991-1992’s strawberry and banana flavored Urkel-Os.

Paul Kupperberg writes the best-selling monthly Life With Archie: The Married Life magazine for Archie Comics, and is the author of the mystery novel, The Same Old Story, available as an eBook on Amazon.com and Smashwords.com.