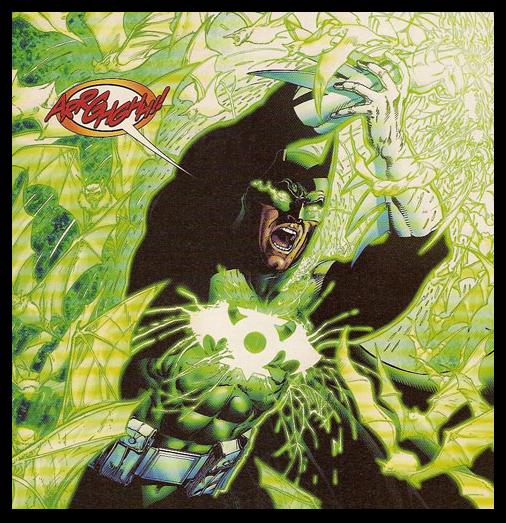 There’s an upcoming story in the Superman/Batman title that will involve our long-eared Dark Knight getting superhuman abilities (albeit, temporarily). Writers Michael Green and Mike Johnson have been doing great work on the title, so this promises to be an entertaining tale.

But did you know that this won’t be the first time Batman has been given super-human talents? Here are just some of the more interesting adventures that have occurred when Bruce Wayne wound up gifted with "power and abilities far beyond those of mortal men."

PLEASE NOTE: I am not including times where Batman used technology to help him out, such as a suit of armor or a rocket pack or New God weapons. Nor am I including times when he got powers for only a few pages, such as when he borrowed Hawkman’s wing-harness and Nth metal belt or the time that Hal Jordan let him try on his Green Lantern power ring for a minute. Those times may have been cool, but they lasted for only a scene rather than a fully story. Likewise, I am not including any Elseworlds tales, so deal with it. 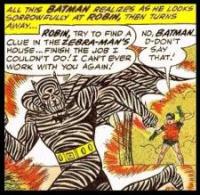 In this tale, Batman and Robin fought a villain called the Zebra-Man, who had magnetic powers thanks to a machine (just like a REAL zebra). But then Batman accidentally activated the same device and became the "Zebra Batman."

Along with a bizarre new appearance (amazing how these kinda of accidents also affect your clothing), Batman could now manipulate magnetic forces. Sadly, he couldn’t control this at all and was concerned that he was now too dangerous to be around people. It was quite a hassle for him before he finally got himself cured. But hey, it could’ve been worse. He could’ve been transformed into the Turtle Batman or the Platypus Batman.

Come to think of it, how can you name yourself after TWO animals? Isn’t that just greedy? Unless there’s actually a species of zebra-bat out there that has escaped my notice. Hmmm. Something to investigate later … 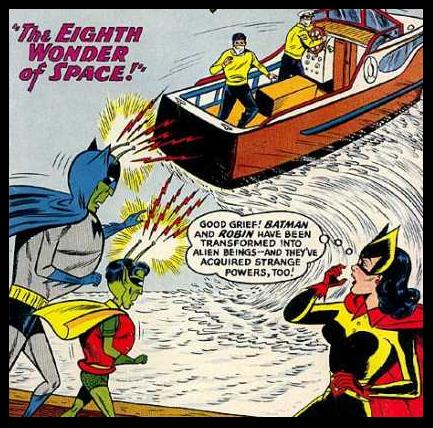 "THE EIGHTH WONDER OF SPACE"

Batman adopted the guise of a Bat to strike terror into the hearts of criminals. You can imagine how much creepier he would look if he had … green skin and antennae?

After an encounter with some aliens, Batman and Robin found themselves temporarily mutated with alien traits. Along with green skin and a bug-like appearance, they also developed telekinetic abilities. Of course, this played havoc with their secret identities. Bruce Wayne’s immediate concern was how he was supposed to show up for his date with Kathy Kane when he looked like a buggy Martian. Which just goes to show you, super-powers ain’t worth jack if you can’t get the ladies.

Thankfully, this transformation was only temporary and did not force Bruce Wayne to give up his reputation as a cool playboy. 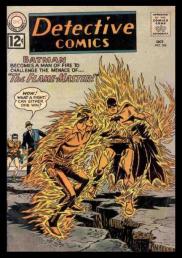 Pete Dale was a petty thief and certainly no match for the Dark Knight. But then he came across Native American relics that gave him control over the four elements. He then set off on a crime spree under the new alias of the Flame-Master (perhaps not the wisest name choice, but this guy wasn’t a rocket scientist, folks).

When Batman encountered Dale, the criminal was now too powerful to simply trap or knock out with a batarang. And along with his new magic, Dale also had a gang of hoods who followed his every command.

Bruce could’ve called Superman for help, but our boy prefers to tackle things on his own. So instead, Batman grabbed the relics and pulled the same trick, transforming himself into an elemental being and leaving us with one of the most memorable Detective Comics covers around.

This story came out in Batman #113 (1958) and has influenced some of Grant Morrison’s current storyline in Batman. 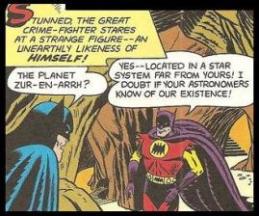 On the distant planet of Zur-En-Arrh, located on the other end of the galaxy, a scientist named Tlano watched Batman’s adventures on Earth through a powerful telescope. So impressed was he that he became his own version of Batman to help the people of his planet, creating his own lair and donning a color-clashing costume that mimicked the Dark Knight.

But one day, Zur-En-Arrh was being invaded by alien warriors.Tlano teleported the real Batman to his planet and asked the guy for help. Bruce agreed and they went into action.

The real surprise came when Batman discovered that he now had super-powers. It turned out that the environment of Zur-En-Arrh affected Earthmen in a similar way to how Earth affects Kryptonians, and so Batman suddenly found himself gifted with great strength, flight and near invulnerability. Thanks to this, Batman was able to fight off a full-scale alien invasion all by his lonesome. And that’s just a great addition to your resume as a super-hero.

At the end of the adventure, Batman returned to Earth, of course, and Tlano of Zur-En-Arrh gave him the "Bat Radia" as a going away present, a device that was able to "jam atmospheric molecules." I assume Bruce used it as a paper weight.

Interesting little tid-bit here, the Batman of Zur-En-Arrh was actually the first character to wear a yellow ellipse around the bat-symbol on his costume. Bruce himself didn’t add the yellow elipse until the sixties. And aside from this adventure, Batman would have several others in which he and Superman temporarily switched physical abilities or even bodies, such as World’s Finest #14 and the one-shot JLA: Foreign Bodies. 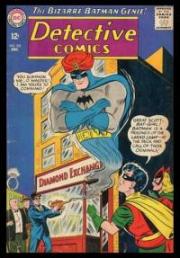 Batman, Robin and Bat-Girl were doing what they do best, chasing criminals and what not. But then a strange turn of events and exposure to magical dust led the Dark Knight to being transformed into a mystical genie, turban and all. Worse yet, the lamp he was bonded to was in the hands of a group of hoods, and so Batman, that great champion of justice, was forced to perform magic spells in service to criminals.

I want you to re-read that paragraph and understand the sheer hilarity of it all. Don’t you miss the sixties now?

And really, the cover to Detective Comics #322 is one of the greatest comic covers in existence. Don’t you think the next Batman movie poster should be modeled after this? Maybe in the next film, we can convince Christian Bale to put a turban on over his cowl.

Hey, it could happen, people!

Okay, we have to at least have one serious story on the list.

Written by ComicMix‘s own Dennis O’Neil (one of the big-wigs of Batman storytelling, mind you), this story took place during the early years of Batman’s career. After failing to save the life of a child, and aware of the increasing presence of super-villains and other situations a utility belt just couldn’t handle, Bruce decided he needed an edge. He went to a scientist who had been experimenting on creating enhanced soldiers and offered Batman a chemical code-named: Venom.

Thanks to Venom, Batman gained super-strength and resiliency. But it affected his mind as well, causing him to become more aggressive and savage. By the time Batman realized the drugs were having an adverse affect, he was already addicted and now had to face the dark road back to sanity and health.

Although he beat this addiction, Bruce was not free from the presence of Venom in his life. Years later, a new and improved version of the drug would give rise to the villain Bane, the man who would later break the Bat in Knightfall.

So that about does it for our list. Hope you enjoyed it and be on the look-out for future ComicMix Six posts! Cheers!

Alan Kistler once visited Zur-En-Arrh but was asked to leave when he kept making fun of everyone’s fashion sense. He has been recognized by mainstream media outlets as a comic book historian, and can be seen in the "Special Features" sections of the Adventures of Aquaman and Justice League: New Frontier DVDs. His personal website can be found at: KistlerUniverse.com. One of these days he’d love to write for DC or Marvel.