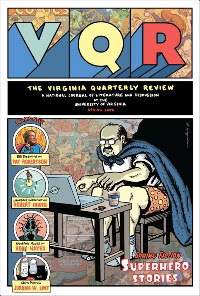 Comics have long battled against proponents of "serious literature," who have often decried comics as a less intellectual medium than prose.

In the past few years, comics have become increasingly accepted into popular culture, and now it seems they’re well established in the literary world too.

, one of the elite literary magazines, ran a special comics issue this spring, which I just happened across on a recent trip to the bookstore.

It features a cover by Art Spiegelman (seen at right) and, best of all, a new story from Chris Ware. The fictional biography of Jordan W. Lint shows the character’s life through a glance at single days of his existence.

You can see a preview at the VQR Web site, right here.