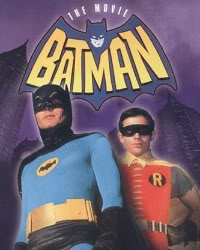 The 1960s Batman TV series couldn’t be more different than the current movie versions — Batman Begins and the upcoming The Dark Knight — with the former being campy fun and the latter being dark, psychological action epics.

Variety tracked down Lorenzo Semple, Jr., writer of the Adam West TV version, and printed a lengthy article from him on the differences between the Batman stories and how his version came to be.

As we sat in the garden of that splendid caravanserai, sipping cool sangria, Bill pulled something from the inner pocket of his jacket. For those who never had the privilege of knowing him, Bill Dozier was one sophisticated gent. "This," he said, with a look of humiliation bordering on shame, "is what ABC has given us." It was, as the shrewd reader will have guessed, a copy of the comicbook "Batman." I’d seen this comic from time to time, even read it with amusement, but I was hardly a dedicated fan. Nevertheless. At the risk of pretending to Minerva-like wisdom, I must tell it like it happened: The TV show concept virtually exploded in my sangria-enhanced brain, full-blown. Bill asked me what I was thinking. I replied it was a really terrific idea — trust me and fly back home to Los Angeles, and I would write it. Trust me. …

It was a writer’s hog heaven. I was sent four issues of the comic for plot ideas, each featuring one of the Big Four villains. The Joker seemed the best pilot choice, though I’m not sure why. I mailed Bill the script at Fox. He and his folks loved it. Then I flew back from Malaga to New York for a meeting with ABC, where Bill eloquently pitched the script and its high-camp POW!! BLAM!! WHAMMO!! style, those onscreen graphics already written in. The network was a bit flabbergasted, so different was this from their usual pilot, but they got it. A particular supporter was exec Douglas Cramer, whom I like to think was only exhibiting the same exquisite connoisseur’s taste that has since made him one of America’s leading contemporary art mavens and collectors.