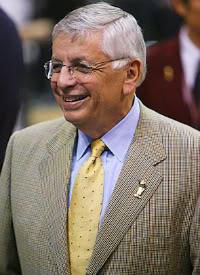 Comic books usually fall back on stories of good versus evil, superheroes battling against villains with the fate of the world on the line.

DC Comics is taking a new spin on that with their big summer event, Final Crisis, which posits that the dark side of Darkseid has triumphed, and the heroes are left scrambling. Grant Morrison, the writer of that incoherent mess, would be well served to take a few lessons from an all too true story of evil defeating good.

In the not so recent past, a wealthy Oklahoma businessman swooped in to buy the Seattle Supersonics (my favorite team in my favorite league, the NBA). The new owner, Clay Bennett, agreed to keep the team in Seattle, where the Sonics had won a championship and built a legion of fans.

Gradually, it became clear Bennett wanted all along to steal the team away to Oklahoma City, spurning his supposed "good faith effort" to remain in Seattle. The man who’s supposed to oversee the NBA and prevent things like entire fan bases from being ripped off is commissioner David Stern, at right.

Unfortunately for Sonics fans, Stern and Bennett are old chums, so the commish managed to actually speed along the move, even telling Seattle it was the city’s fault.

The city did all it could to fight back, but ended up not having the muscle, and the Sonics are now history.

We’ll see if Superman, Batman and company end up victorious in Final Crisis. But in the real world, the good guys don’t always win.