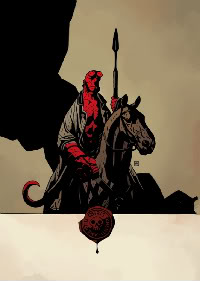 With Hellboy 2: The Golden Army coming out on Friday, it’s probably no coincidence that Dark Horse just posted a preview of the next Hellboy

Head over to MySpace to see the cover (at right) and first six pages to Hellboy: Wild Hunt #1, which is set to debut in December. The series once again pairs Mike Mignola with artist Duncan Fegredo.

Here’s what the story’s about:

When ancient giants begin to rise from their graves across England, Hellboy is invited to join a mysterious group called The Wild Hunt and help bring them down. But the hunt leads to betrayal and death, and Hellboy is forced to face the consequences of his past actions—actions that now threaten the survival of all mankind. "The fading children of the earth" gather in the shadows, awaiting the promised return of the "Queen of Blood" and a chance to shake the trees, crack mountains, and make the daytime world weep for fear."