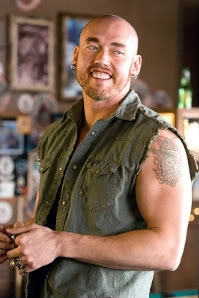 Fans of Lost and 3:10 to Yuma know well how good Kevin Durand is at playing one mean prick. And soon we’ll all get to see how he fares at playing a mean, fat prick, as Durand is starring as Blob opposite Hugh Jackman in the upcoming Wolverine movie.

"I wasn’t a comic book kid because I was busy playing hockey here in Thunder Bay. That’s all I wanted to do and all I dreamed of really. But when I saw the first (X-Men film), I was just in awe and the second one (X2: X-Men United) just blew me away," he said.

When he heard the news a new installment was in the works, he was hoping the producers would consider him for a part and luckily for Durand, they already knew his name and called for him to take a look at the part.

And to get the larger than life Blob ready for the cameras, it took six months of costume and special effects preparation.

"I have a feeling people are going to like him," Durand said.

Wolverine is planned for a fall 2009 release.