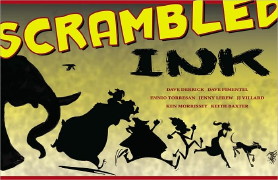 [[[Scrambled Ink]]] is the latest in the recent flurry of comics anthologies by animators, following the high-profile and very successful Flight series (which recently hit its fifth volume) and the slightly newer but still popular [[[Out of Picture]]] (which had a second volume earlier this year). It was published quietly a few months back, and doesn’t seem to have made much of a stir.

And that’s a real shame, since Scrambled Ink is more inventive and ambitious than the most recent [[[Flight]]] and Out of Picture books put together. (And that despite Scrambled Ink being a physically smaller book with only six stories in it.) I’m not sure why that would be – Scrambled Ink comes from animators who worked on [[[Bee Movie]]], not what one thinks of as an excitingly transgressive piece of cinema – but these DreamWorks animators are definitely doing something different from their Blue Sky compatriots from Out of Picture.

Two of the tales in Scrambled Ink – “[[[Kadogo: The Next Big Thing]]]” by David G. Derrick, Jr. and Ken Morrissey & Keith Baxter’s “[[[Greedy Grizzly]]]” – would have been right at home in one of the other anthologies: they’re morality tales, with animal casts, that could easily have been afterschool specials or “heartwarming” animated shorts. Both also have excellent art – Derrick with an earth-toned watercolor palette very appropriate to his African story and Baxter with an appealingly loose version of a cute-animal children’s’ book style. These stories could have fit in perfectly well in [[[Flight 12]]] or Out of Picture 9, but here in Scrambled Ink, they’re notable for seeming a little less refined and a little more obvious than the other four stories.

The rest of Scrambled Ink, I’m happy to say, would have stood out immediately from any other animators’ anthology. And one of them – J.J. Villard’s day-glo Goth graveyard horror story “[[[Dig Dig Die Die]]]” – might even have been notable in a much more “indie” anthology. The other three stories aren’t as far out as Villard’s Big Daddy Roth-meets-EC brainstorm, but they’re far from the safe, kid-friendly work that most animator-anthologies traffic in.

Of those other three stories, Jenny Lerew’s “[[[Point and Shoo]]]t” is the most conventional, a semi-autobiographical tale of a girl’s first time in Paris and the big dog she meets there. But the mere fact that it’s from a woman’s point of view – both character and creator – gives it something different from the usually all-male club of these anthologies, and Lerew has a great loose style, reminiscent of mid-‘60s Disney storyboards, with swooping lines of varying width and a wonderful sense of gesture.

There’s another semi-autobiographical story here, too, in Ennio Torresan’s “The Guy From Ipanema.” It’s a weird story about a guy who lies around on the beach in Rio (with a big wad of money in his Speedo, which seems to be forgotten up until the point when it isn’t), sort-of saves a girl from drowning, and eventually emigrates to the US because of the cars. It gets odder and sillier from there; Torresan is apparently just riffing on events in his life, in ways that aren’t entirely clear to those of us who don’t already know him. But the energy and happy lunacy of this story are infectious; it’s impossible not to laugh at Guy’s nutty antics.

And the last story – actually the second one in the book, but the last I’ll tell you about – is David Pimentel’s “[[[Burger Run]]].” His art also looks a bit like storyboards, though Pimentel varies the size of his panels and their placement to turn into a comics story. It’s about a guy buying burgers one night at a drive-thru, at the same time a robber is holding up the counter inside. The story goes along in a manic mode reminiscent of Kyle Baker, and ends in a way you’d never see in Flight. I don’t know if it’s high art, but it’s funny, moves fast and features dialogue like “You made me pull away! You with your double meaty cheesy bacon core, and your special recipe from ten generations! Oh, you think you’re sooo smart just because people want to eat you!!!” How can you resist that?

Scrambled Ink is a fine anthology, which deserves a much wider audience than I think it’s gotten so far. Maybe it was that drab cover, or maybe the quotes from Jeffrey Katzenberg and Jerry Seinfeld led readers to expect something less interesting that is really here. But Scrambled Ink is a real hoot and a half.