Rough Cut of ‘The Spirit’ Completed 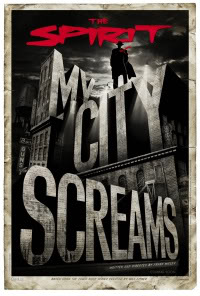 The always worth reading Variety Bags and Boards blog has an update on the upcoming The Spirit movie, adapted by Frank Miller from Will Eisner’s cherished comics series.

We recently spoke with "The Spirit" producer Deborah Del Prete, who says a green-screen cut of the film has been completed and has everyone very excited about the results. The production is now waiting as more than 1,800 VFX shots are coming in from San Francisco-based house The Orphanage. … Expect to see some new footage from the film at Comic-Con …

This shouldn’t do anything to ease concerns some fans have expressed that The Spirit is going to follow the visual cues of 300 and Sin City, both of which relied heavily on green screens and special effects. But at least we’ll soon be able to see some actual footage and judge for ourselves.

Meanwhile, four new posters have been released for the film, each featuring one of the femme fatales from the Frank Miller-directed film. Head over to Yahoo! to hear the actresses speak the lines. Can’t say I’m thrilled to see the "keep the mask on" line reappear after All-Star Batman & Robin the Boy Wonder #7, but it should work better with The Spirit than Batman.

The posters, available right here, are of the various female characters in the film, including those notorious femme fatales.