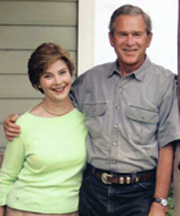 Sunday afternoon. Two hundred and four days left before he gallops on back to Texas and that consarn brush that always seems to need clearing.

Listen, I want to make an offer… George and Laura, if you need help moving, just give me a call. I can be at the White House in five or six hours and, sure, I’m not as young as I once was, but I can still lift a box or two, and I’ll be more than happy to buy the pizza.

And now for something completely different…

Last week, we mentioned crossovers – specifically, how Marvel’s movie division seems to be getting ready to emulate the comic book division’s old, old ploy and engage in crossovers. The trick, as I’m sure you know, is simple: take a lead character from one series and put said character into another. Comics have, as mentioned in the earlier column, have been doing crossovers for a long time, probably beginning with Sub-Mariner and The Human Torch hassling in the early 40s. I’m not counting DC’s Justice Society title, which assembled a small herd of super doers, because these guys and gal weren’t moving into each other’s magazines, but into a separate venue. (Does anyone know of any crossing over earlier than that of Subby and The Torch?)

It didn’t stop with the comics, even way back then. About once a year, Batman and Robin took over bad-guy-catching chores from the radio version of Superman for a week or two while the Man of Steel was indisposed and the actor who voiced him, Bud Collyer, took a vacation.

Jump ahead 60 or 70 years and we find that television cops have been occasionally popping into each other’s precincts, most recently just a couple of weeks ago when Mary Shannon, from cable’s In Plain Sight, paid a brief visit to Law and Order: Criminal Intent, and we were mighty glad to see her, too. (I would be mighty glad to see the actress who plays Ms. Shannon anywhere, at any time, in anything. I wonder if she needs help moving… And before you ask, yes, my dirty old man merit badge is glowing.)

Now, why do editors and producers and network executives bother with crossovers? Why, because they use every waking hour racking their brains trying to provide nice treats for their fans… Okay, not completely true. Crossovers have several uses, the most obvious of which is induce the audience for one show, or comic book, or movie, to sample another. Then there’s the “back door pilot” maneuver, in which a character is introduced in an already ongoing venue to test the character’s potential. That’s done often in television and was at least once tried, successfully, in Marvel Comics when Stan Lee had someone in a Captain America costume appear in a 1963 Human Torch story. (That guy was an imposter. The real Cap came along about a year later, in The Avengers)

Have we exhausted the subject of crossovers? I dunno… Stay tuned.

RECOMMENDED READING: The Tao of Pooh, by Benjamin Hoff.