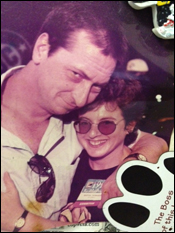 There’s been a lot of noise on two areas of the blogosphere that I follow – comics and politics – because Frank Miller recently posted about the Occupy Wall Street movement on his blog. My favorite response, as usual, was on TBogg’s blog, because I love me some snark.

See that photo over there? It’s had an honorable position on my refrigerator since it was taken about 15 years ago at the San Diego Comic Convention. It’s me and Frank, back when he could still walk the floor.

I’ve known Frank since the late 1970s. I met him soon after I met Denny O’Neil, and we hung out a lot when he was drawing the Amazing Spider-Man Annual #14. My friend, Legs McNeil <http://www.amazon.com/Legs-McNeil/e/B000APOLAA>,  was (and is) a huge comic book fan. He managed a band, Shrapnel, that was essentially Sgt. Rock set to music. We conspired to put them into an issue of a comic book, a mission that required many trips to CBGBs.

I don’t remember talking politics with him, but its possible that I did. There are a lot of people in comics that I like, but with whom I disagree politically. Dan Jurgens, Larry Hama, Chuck Dixon – we don’t agree, and that’s fine. We also tend to like different kinds of music, movies and books. We have fun conversations.

Our disagreements never led me to boycott their work. And I’ll boycott quite easily. For example, I haven’t bought any Revlon cosmetics since Ron Perelman plundered Marvel.

But I won’t give up something that gives me joy. If my joy is ruined by my disagreement with the owner or creator, then I’ll give it up.

What amused me about this particular kerfuffle is that, once you got away from the comic book sites, the reactions were fairly hilarious. Most people seem to think that Frank Miller, not Zach Snyder, was responsible for the movie, 300. It’s true that Snyder spent a lot of time and energy trying to mimic specific pages of Frank’s work, but he also added a lot of other stuff to fill out the 117 minutes of playing time.

I disagree with Frank on this issue. I think he’s wrong, profoundly wrong. I think he’s far away from this issue, and getting his information from less than reliable sources.

But I don’t think he deserves to be called names. As grown-ups who defend the free exchange of ideas, we can disagree with each other. We should. But it’s bad for the country when we descend into name-calling.

In other words, this.