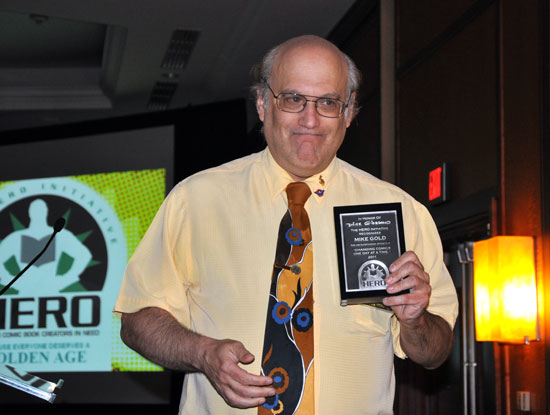 We are exceptionally proud to note that our own Mike Gold, Editor in Chief of ComicMix, was given the first Dick Giordano Humanitarian Of The Year Award from the HERO Initiative at this year’s Harvey Awards ceremony at the Baltimore Comic-Con. The award was presented by Mark Wheatley.

While note was made of Mike’s long career and assistance to various creators and causes, and the publishing of Dick Giordano’s last major comics work, White Viper, he was singled out this year for the efforts in raising money to save comics writer John Ostrander‘s eyesight.

In his acceptance speech, Mike thanked Gail Simone and Adriane Nash, who worked with him on fundraising. 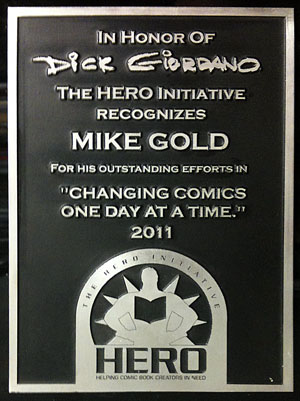 Mike is a 30-year veteran of the comics industry, having served as group editor and director of editorial development for DC Comics, founder and editorial director of First Comics Inc., and publisher of Classics Illustrated. Prior to ComicMix, Gold had been editorial director for ArrogantMGMS, creating intellectual properties and overseeing media and ancillary rights and packaging comic books published by numerous comic book imprints, including Image, Acclaim and IDW.

He was a pioneer in the creation of an American market for graphic novels, and edited more than three-dozen graphic novels and anthologies, including the bestsellers The Greatest Batman Stories Ever Told, Green Arrow: The Longbow Hunters, The Joker: Stacked Deck, GrimJack: Killer Instinct, Jon Sable Freelance: Bloodtrail and American Flagg!.

In addition, Mike has an extensive background in the media and in the youth social services field, having been a broadcaster and radio personality, director of communication and education for a major Chicago drug abuse prevention program, cofounder and director of communication of the National Runaway Switchboard, and creator, and managing editor of Video Action magazine.

He has been an author and editor of, or contributor to, more than one dozen books, including, as Mark was quick to point out, [[[How To Draw Those Bodacious Bad Babes of Comics]]] with artist Frank McLaughlin. His work has appeared a wide range of newspapers and magazines, including The Chicago Tribune, The Realist and the British edition of MacUser magazine.

He has also served as a consultant to the Organic Theater of Chicago (home to Dennis Franz, Joe Mantegna, Ray Bradbury and David Mamet), the Stratford Connecticut Shakespeare Festival Theater, to numerous political efforts, and to The Child Care Center of Stamford, an award-winning Head Start and early childhood education program, as well as a media coordinator for the Chicago Conspiracy Trial.